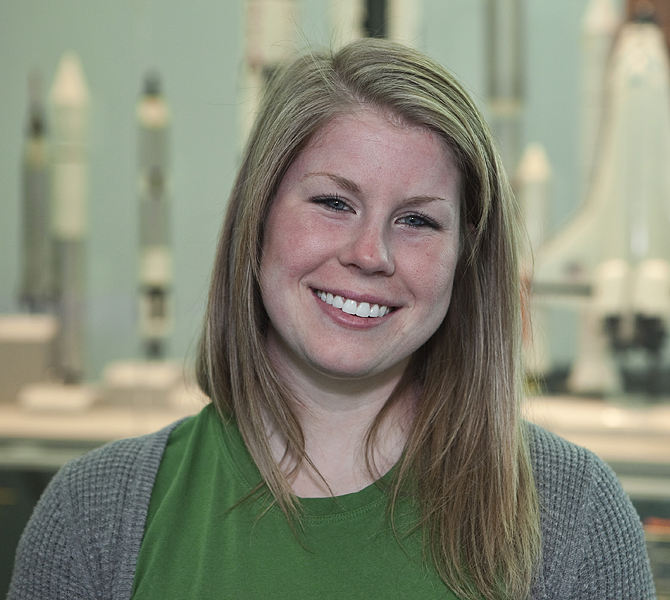 Image above: Sarah Crecelius wants to chase tornados, but for now she does educational outreach for the Science Directorate through Science System and Applications Inc. (SSAI) Credit: NASA/Sean Smith

The outreach that Sarah Crecelius provides for the Climate Science Branch is a patchwork of her past and present.

She graduated from Ohio State with a degree in atmospheric science and a minor in natural resource management. She worked with chief meteorologists in Ohio. She also supported the Smithsonian Environmental Research Center with carbon dioxide (C02) research.

When Crecelius was hired into NASA Langley's Science Directorate by Science System and Applications Inc. (SSAI), she began developing a course of study to educate others about Clouds and the Earth's Radiant Energy System (CERES) satellite data.

As a student, she hoped that she would find herself in the midst of weather, climate and air quality research. For that reason, among others, she considers her career an accomplishment.

"It's amazing that we work out of an office in Hampton, Va., and can converse with and receive cloud observations from students in Nicaragua," Crecelius said. "The world is much closer today than ever before."

"We receive data from a team sailing around the Americas, and that information can be at the public’s fingertips in a short period of time."

She takes pride from her work and pride from being a Buckeye, born and raised in Columbus. "I bleed scarlet and grey," she said.

Crecelius enjoys meeting new people, staying active and exploring what the world has to offer.

As a fifth grader, she lived in France for three weeks as part of an exchange program. Her "sporadic visits" since then have led her to the small town of Strasbourg, on the border of France and Germany.

"It has been owned back and forth by both countries for many years," Crecelius said. "It seems to have its own identity, and it is a place where I feel at home even though I am half way across the world."

Since she was age 1, her family has taken an annual trip to the northern side of the Algonquin Provincial Park in Ontario, where her aunt runs a lodge.

Her desire to explore is unlimited.

Although she has accomplished one dream through her career at NASA Langley, there is another that lingers … chasing tornados. For now, her parents can rest easier knowing that their only child’s career field doesn’t involve a rotating column of destructive winds.

And for now, she’ll focus on the clouds. She’s already survived an AFF-style (Accelerated Freefall) skydive through them.

Only time will tell what the future will patch into her work.