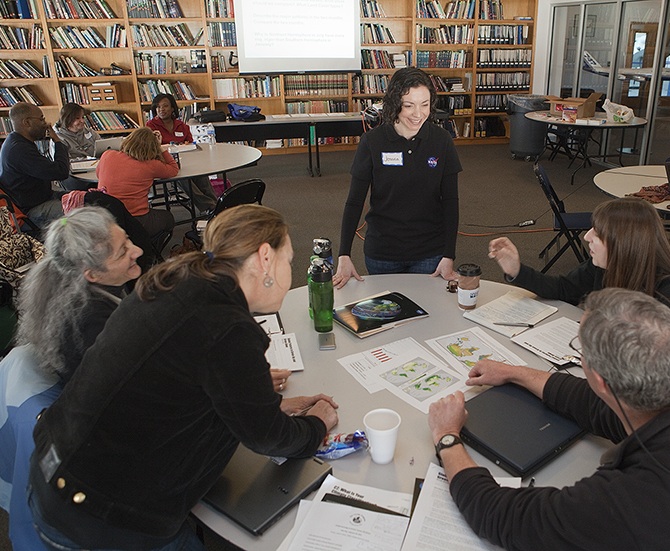 Image above: Jessica Taylor works at NASA Langley as an education and public outreach lead for CALIPSO and as a lead trainer for the GLOBE program. Credit: NASA/Sean Smith

Growing up in Florida, Jessica Taylor was fascinated by the flashes of light in the sky that came with a storm. It wasn't until later that she learned those flashes were discharge of atmospheric electricity in the clouds or between clouds and the ground.

In reflection, she realizes that she, solely, drove herself to a love of science and a love of teaching it.

She asks herself: "What was it?"

"It" being the "thing" that drove her there. Taylor didn't have any great mentors in school. And many males incenuated that science wasn't a woman's place. In the ninth grade, she was told that she shouldn't enter into a gifted or accelerated program, "because all they do there is color."

In asking herself that question, she realized that, for all students, it is a different "thing" that drives them to science.

"To one person, it might have been a movie. To another, it could have been a conversation they had with someone," Taylor said.

She realized that, as an education and public outreach lead for CALIPSO (Cloud-Aerosol Lidar and Infrared Pathfinder Satellite Observation) and a lead trainer for GLOBE (Global Learning and Observations to Benefit the Environment) at NASA's Langley Research Center, her role model switch should always be on.

She became more aware of that while teaching meteorology to undeclared majors at Florida State University (FSU). While studying meteorology, a professor of Taylor’s, Dr. Paul Ruscher, recognized her ability to teach and he encouraged her to combine science and teaching. She went on to earn her Master's degree in Science Education.

She actually began working with the GLOBE program in college. When she started her work at Langley about two years ago, she was tasked with revitalizing the center's partnership with GLOBE, an international K-12 environmental science program.

For CALIPSO, Taylor works education and outreach through three phases: working with teachers, physical visits to schools and, finally, coordinating interactions between scientists and students. The goal and vision is to see teachers implementing scientific research in the classroom.

Her husband of five years, Patrick, also works at NASA Langley in climate science. They met while in graduate school for meteorology at FSU. They do, sometimes, end up talking about climate at the dinner table. But the conversations can be rewarding for Taylor, who appreciates her husbands feedback on program ideas.

Taylor looks forward to taking her husband to Mexico to meet her family soon. She used to spend her summers there since both of her parents worked in the Florida public school system. She and Patrick's only visit to Mexico together this far, was to Cancun for their honeymoon.

Taylor, who also speaks Spanish, shares bits of her heritage through language and dance. She enjoys salsa dancing and expects it to always remain a part of her life.

For Taylor, no borders exist when it comes to students and science. And borders don't exist in the sky -- where her "it" was found.