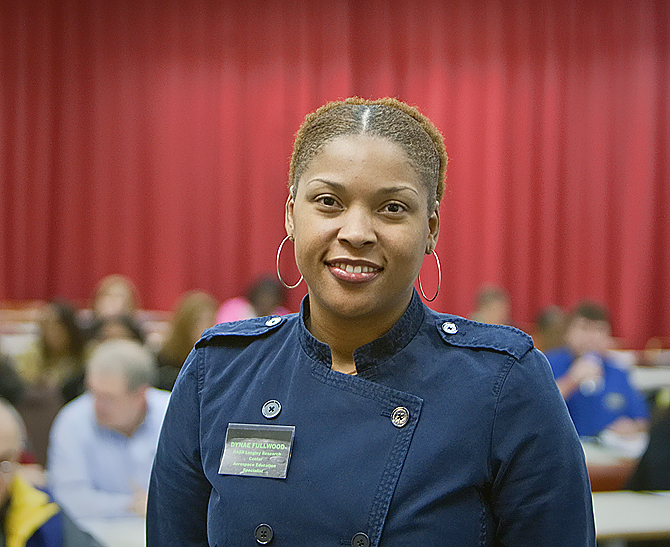 Image above: Dynae Fullwood enjoys pondering the possibilities of education while driving to teach her next group of teachers. Credit: NASA/Sean Smith

She's a walking – sometimes a running – contradiction, a woman who enjoys meditating on long drives alone to South Carolina to teach teachers to teach science and math.

A woman who ran up a $100 cell phone bill while running the Honolulu Marathon.

"I like Bohemian, eccentric things," said Dynae Fullwood, who works in education under a Penn State contract. "I want to be 'Dynae: Shes diverse, always changing things, you can't case her.' I like that."

She came to education from Houston, her home, where she taught high school and enjoyed watching students grow. And then she realized she wasn't growing herself.

"I was enjoying the classroom," she said. "Just waking up and running with it each day was terrific. 'What are we doing today?' Whether it was an experiment, investigating a spectrum of light, sending off rockets, I realized that it was one thing to see a concept in a book, but it's an art form for a teacher to bring that two-dimensional concept into the light."

It's what she does with NASA, traveling to schools in South Carolina, North Carolina and part of Virginia. Fullwood spends about half of her time on the road, showing teachers how to use tactile methods to get points across to their classes.

It takes about six hours of planning for every one hour spent with those teachers.

And it's not all about science and math.

"The other day, I went to Whitlock Junior High School in Spartanburg, S.C., and did an activity called 'Moon Math Crater,' " Fullwood said. "It required you to know something about science, the moon, something about cratering and dimensions and math.

"They were surprised when I pulled out an article that went with the activity and showed how you can pull in the English Language Arts teacher from the seventh- or eighth-grade team.

"It married the STEM (Science, Technology, Engineering and Math) folks to the English-Language Arts folks by having them understand the cross disciplines involved."

And it brought home the message that research depends on the ability to understand and communicate the problem and its result.

"If there is no basic understanding of English and creative writing, there is no end product," she said.

The road offers her new horizons, both visually as she travels and mentally as she uses her time between stops. Part of that time spent pondering deals with the future of education as she sees it and is preparing for her part in it.

For one thing, it pushed her toward pursuing a doctorate in distance learning.

"There hasn't been enough research done on how to deliver content in a virtual setting," she said. "There are many ways to deliver an education rather than just face-to-face meetings.

"It’s time to change our mindset from teacher to being a facilitator of learning.

Most of the 50 percent of time in the office is spent preparing for the 50 percent on the road: logistics of travel, coming up with new education tools, planning, following up visits.

Time away is spent on scrapbooking and spray-painting projects.

"I'm always thinking, 'when I retire I want to open a small business in some kind of artsy area that will showcase my art projects,' " she said. "I really don't care if I don't sell anything. I just want people to be able to come in and say 'that was a neat thing to do. Why didn't I think of that?' "

And she spends some of it in exercise, which explains the Honolulu Marathon.

"When I was at Goddard (Space Flight Center), I was living in D.C.," she said. "One day I was out running along the Anacostia River, and I happened to see a group of people in running gear. They invited me to join them."

That led her to run in the Honolulu Marathon.

"That was a test of endurance like you've never, ever experienced," she said. "When I crossed the finish line, I felt the same way I felt the day I graduated from college."

Still, it wasn't all endurance. She finished in five hours, 15 minutes and change, partly because along the way she stopped to smell the frangipani.

"I think I would have finished sooner if I hadn’t been texting while I was running," she said. "I stopped to take pictures. Hey, I was in Hawaii. Ridiculous behavior, I suppose, but it was fun. I was calling people. My boss was like 'what are you doing?' I just said, 'I’m running.' "

She’s still running from town to town, school to school, pondering what she’ll do next. And making certain that nobody can stereotype "Dynae."