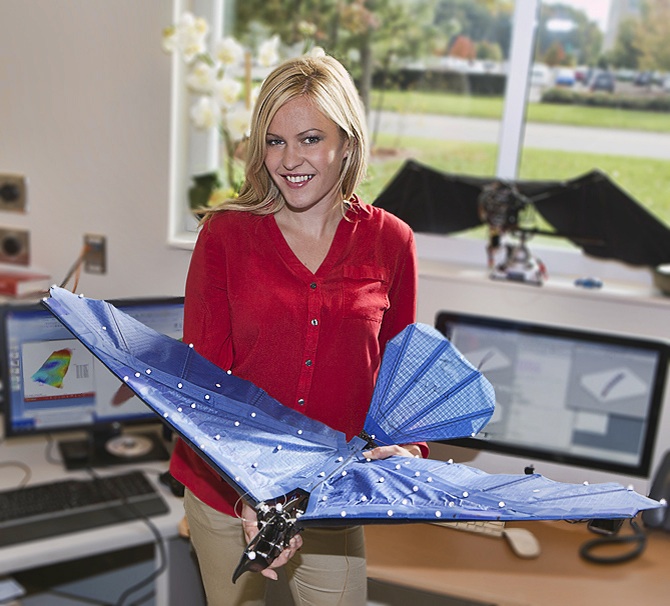 
Cornelia Altenbuchner is a die-hard engineer.

Even as a little girl growing up in Austria, she loved creating and exploring things.

"I didn't know what an engineer was," she said, "but I was doing that kind of thing."

Talented in math and physics, and eager to do what she could to make the world better, Altenbuchner went to college to study mechanical engineering. While pursuing her master's degree in Germany she worked for BMW, Siemens and the Royal College of Surgeons in Ireland in the field of bioengineering. She also worked with Amst System techniques in Austria to design flight simulators.

While working at Siemens, Altenbuchner was part of a four-person team that developed AdBlue exhaust gas aftertreatment, a system that reduces exhaust emissions in diesel automobiles.

It wasn't until after she'd completed her master's, during a trip home for Christmas, that she realized the scope of what she'd been involved in. She flew into Barcelona and when she stepped off the plane, she was greeted with billboards promoting the AdBlue technology she'd helped develop — it had been integrated into a Volkswagon series.

"It was so exciting to see that randomly all over the Barcelona airport," she said.

It was also while working on her master's program with Siemens that Altenbuchner found out about the Ph.D. program at the National Institute of Aerospace (NIA). After working as a systems engineer, she headed to the U.S. to start work on her doctorate, which she's completing through the University of Maryland. Her advisor is James Hubbard, the director of the Center for Adaptive Aerospace Vehicle Technology.

Altenbuchner's work at the NIA centers around something called flexible multi-body dynamics. In layman's terms: she's helping to engineer aircraft with morphing and flapping wings.

The trick is that an aircraft with flapping wings has unsteady aerodynamics. And because it has to be flexible, that also complicates the structural dynamics. So Altenbuchner's doctorate is to model how the aircraft might behave and experimentally validate those models — something she loves doing.

"You model something you predicted," she said, "then you change it that way and it flies and it does what you said it's going to do — isn't that awesome?"

That passion Altenbuchner has for her work bleeds over into her personal life, too. She's a huge fan of the outdoors — especially when there's water involved. She lists surfing, beach runs, snowboarding and kayaking as some of her favorite activities. But perhaps the thing she's most drawn to is sailing. It's had a huge impact on her life.

Just after midnight on May 13, 2011, Altenbuchner found herself treading water in the chilly James River. A celebratory evening had taken a serious turn when the sailboat she and nine companions were on capsized.

Though the group tried to stick together and swim to shore, within minutes, Altenbuchner and her friend, Tyler Lorenzi, found themselves being swept downstream by the river's powerful currents.

As those minutes turned to hours, Altenbuchner never panicked or lost hope. Instead, she and Lorenzi renewed their efforts to swim to shore. When that failed, they focused their energy on staying afloat and catching the attention of passing rescue boats.

Eventually, after six hours in the 60-degree water, rescue did come. Altenbuchner and seven others from the original group survived. Lorenzi and another young man, Alex Brown, died.

Reminders of that night surround her.

The building she works in is called the Alex Brown Center for Adaptive Aerospace Vehicle Technology. Outside, there's a picnic area that she and her friends built as a memorial to Brown and Lorenzi. And on Altenbuchner's right ankle, there's a tattoo. It features a picture of a sailboat, the date of the accident and the phrase "Life is Good."

According to Altenbuchner, there's a concept in yoga that says people bring things into their lives on the right side of their body and out on the left.

"I also put it on my ankle so whenever I look down or I'm sad, I'm reminded how good life is," she said.

The accident was a defining experience for Altenbuchner, an experience from which she chose to draw positive inspiration. She holds dear the optimistic, anything-is-possible attitudes of Lorenzi and Brown, the powerful support she received from those around her and her own will to survive.

Yet, she's made a conscious decision not to see those six hours as the defining event in her life — and for good reason. This is someone who has accomplished a lot, and who still has a lot left to accomplish.

Just a short time after last year's boating accident, she went to an ocean sailing race with a group of people from the Hampton Yacht Club.

For Altenbuchner, it was important to get back to what she loved. She didn't let fear ruin one of her passions.

Altenbuchner goes sailing every Wednesday now — weekends too, if there's a race. Being out on the water is almost as second nature to her as being an engineer.

"You get to hang out with good people, you're outdoors and you get something to do," she said. "It's really relaxing. It's beautiful."

And life, as Altenbuchner likes to remind herself, is good.