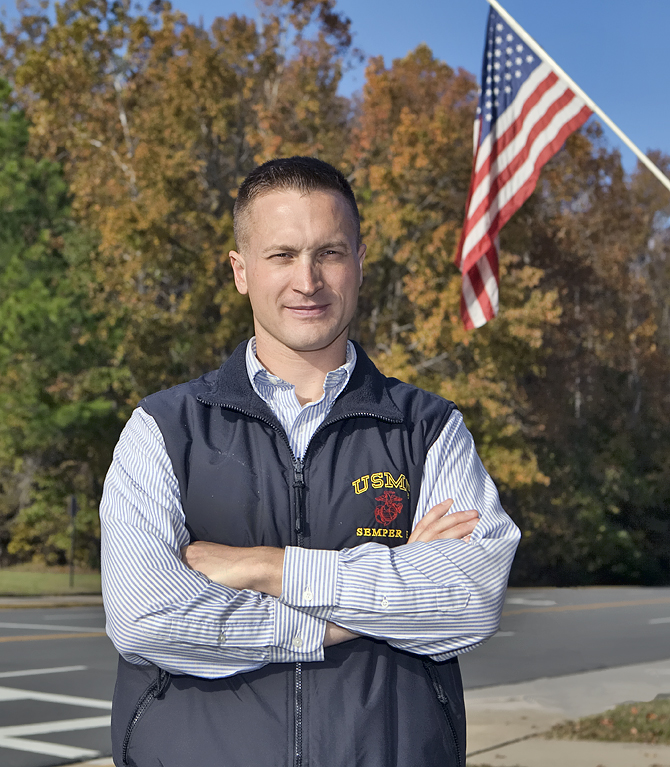 Image above: Bill Fredericks recently returned to NASA Langley from a tour in Afghanistan, spent as a Marine Corps officer. Credit: NASA/Sean Smith

He enjoyed the work. Bill Fredericks was helping plan the future of aviation, something he was trained to do in school at Purdue, and he looked forward to a rewarding engineering career.

But there were walls -- not a criticism of his work environment, mind you, but more of a sense that there had to be more. It's a common feeling for a 26-year-old.

"I didn’t want to be 40 years old and say I’d just sat in this cubicle the whole time," Fredericks said in his Building 1209 environment.

Another force was working here. 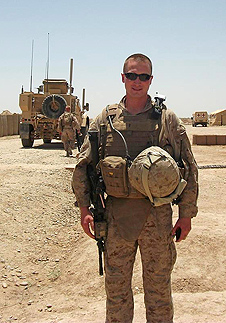 After working on a team with NASA, Lt. Bill Fredericks learned leadership skills in dealing with a platoon of 30 Marines in Afghanistan. Courtesy: Bill Fredericks


Help, in this case, involved a tour in Afghanistan as a Marine Corps reservist. Lt. Bill Fredericks – he has been selected for captain – that ended in August and covered two firebases and work with the Afghan military.

Then again, there was a third force at work. He's a legacy, a third-generation Marine whose grandfather, Wesley, fought in five island campaigns in the Pacific as an engineer. And whose father, William, was an aviation supply officer who retired as a major and now flies for US Airways.

"My dad thought I was too smart to go into the Marine Corps," Fredericks said. "He said I should have joined the Air Force."

Bill Fredericks is a licensed pilot with ratings in gliders, single- and multiple-engine airplanes and in an instrument.

William Fredericks was there to give his son his "Mameluke" sword, a ceremonial sword carried by Marine officers.

"I wasn't sure what to expect," he said. "It has quieted down a lot from what it was. Some Marines got bored from not shooting as many fire missions. There's artillery being shot, but not at the pace it was."

Instead of kinetic missions, much of the job became teaching the Afghan military the math of getting an artillery round from the mouth of a howitzer to the target, often miles distant.

And then there was the transition from being on a NASA project team to leading a platoon of Marines.

"Here at NASA, I'm one of the younger worker bee types," said Fredericks, now 29. "There are 30 Marines in a platoon. It's a different dynamic, being the one doing the work to the one leading the work – dealing with the weather, going out on foot patrols, setting up vehicle check points, keeping everyone going.

"Keeping yourself going. You've got to set the example as a leader, pushing yourself harder than you push them. That's the biggest thing I got out of going to Afghanistan – the leadership experience."

He learned to benefit from the experience of others, and that loyalty down is the only way to generate loyalty up.

"As long as your Marines know that you have their best interests in mind, that we have a job to do, there's little pushback," Fredericks said.

Back now, he's unlikely to deploy to Afghanistan again. After a period of transition, he came back to Langley, doing some of his old work and becoming involved in a new project.

As part of a team, Fredericks is helping design a vertical takeoff and landing unmanned aerial vehicle (VTOL UAV) that will carry a 60-pound payload.

As important, at least to him, is an understanding that a vehicle prototype will actually be built and flown in 2012.

"I'm really pumped because we get to do that," he said.

It's a different sort of "pumped."

"You're not getting the adrenaline rush that you get from the Marine Corps, but I do enjoy it," Fredericks said. "It's a great job."

It's one he can approach with a different sort of experience on his resume, just as he approaches Veterans Day differently now. "When I was young, it was a day off from school," he said. "At home, you might sit around the dinner table and pray for those who went overseas and didn't come home."

Now Fredericks approaches the holiday as a veteran himself. It's a different point of view.