The numbers are staggering, the problem complex.

The answer is simple, according to Robert Zubrin.

"The Congress should pass a law mandating that all cars be 'flex fuel,' " Zubrin told an assembly at Pearl Young Theater on Wednesday.

Zubin is no stranger to Langley. Two years ago, he came to advocate for Mars exploration as founder and chairman of the board of the Mars Society. This time he was at the center to speak of stances he advocates for.

The forum was part of a series of "go green" lectures, sponsored by the Advanced Planning and Partnership Office. Zubrin's opinion is not endorsed by NASA, but it is embraced by some of its employees, if nothing else for the information he imparts. 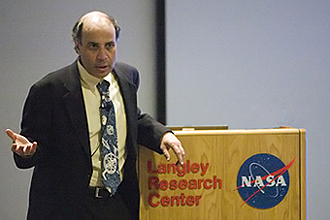 His premise is that oil is the root of much of the planet's evil, and so that evil can be countered by energy from alternate sources: primarily ethanol and methanol.

In a go-for-the-jugular assessment, he called OPEC a "kleptocracy." In "Energy Victory," he offers an aerial map and target information for the Kharg Island oil export terminal in Iran.

Zubrin said that the price of oil, which has crept to nearly $100 a barrel in recent weeks, is not a result of "supply and demand in a free market. This is a price set by a world-wide cartel."

Paying for foreign oil subsidizes terrorism, Zubrin said, and so switching to alcohol-based energy would eliminate that funding and also would mitigate any need for a confrontation in the Middle East.

"Global warming would be curtailed (by cleaner-burning alcohol)," he added, "and pollution would be reduced."

"Flex fuel" cars can use alcohol-based energy or petroleum, whichever is more economical. There are about 24 domestic models offering a "flex fuel" option in the U.S., Zubrin said, and about seven imported models.

"The technology is only about $100 per car," Zubrin said. "You're not talking about a hybrid deal where the difference could be $5,000."

He added that there were only about 75 alcohol pumps among the nation's more than 200,000 service stations, a ratio that would change should Congress heed his call for "flex-fuel" cars.

Zubrin dismissed the notion that energy concerns competing for the world's food supply would drive up the price of grain, current evidence to the contrary notwithstanding.

"There will be enough for both," he said.

Instead, he said, oil-producing countries would have to drop their prices to compete. But even then, he advocates non-dependency.

"Whoever controls the world's fuel supply will control the human future," Zubrin said.

Better, he added, that it is controlled right here in the United States.