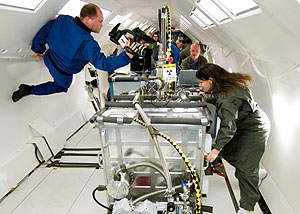 A group of Langley researchers are travelling to Houston, TX, on May 22 to conduct another round of zero-g flight tests on Johnson Space Center (JSC)'s C-9B reduced gravity testbed aircraft. A series of experiments were conducted during the week of Feb. 6-11 using the Electron Beam Freeform Fabrication (EBF3) portable hardware developed and built at LaRC with funding from the C&I and Innovation Institute (ii) programs.

The portable EBF3 system includes a small vacuum chamber, low power electron beam gun, four axis motion control system (X, Y, Z and rotation), single wire feeder, and data acquisition and control system. This system was designed to satisfy all size, weight, power, and safety requirements for conducting flight experiments on the C-9B. This was the maiden voyage of the EBF3 hardware, as well as the first research flight that has been conducted on the C-9B since its arrival at Ellington Field last year.

Electron beam freeform fabrication (EBF3) is an emerging cross-cutting technology for producing structural metal parts that has been developed by researchers at Langley over the past four years. The EBF3 process uses a focused electron beam in a vacuum environment to create a molten pool on a metallic substrate. The beam is translated with respect to the surface of the substrate while metal wire is fed into the pool. A part is thus built directly from a computer file in a layer-additive fashion. This process has gained interest in the Exploration community for the astronauts to fabricate structural spare parts and new tools during long duration human exploration missions. DARPA has also expressed interest in EBF3 as a manufacturing process that could be used for building large space structures on-orbit.

The C-9B research aircraft is flown in parabolic trajectories that result in alternating cycles of 0-g and 1.8-g (zero to nearly twice the gravitational force at sea level on Earth). Each cycle provides 20-30 seconds of weightlessness followed by 80-90 seconds at 1.8-g, with the transition between 0 and 1.8-g occurring over several seconds. EBF3 deposition was only conducted during the 0-g portions of the parabolas. A typical series will repeat the parabolic trajectory 40 times over the course of a two-hour flight.

Two days of test flights were completed before failure of one of the turbomolecular pumps due to an inadvertent in-flight power interruption. Trial deposits started with a simple bead on plate for line, circle, and square builds over a range of different deposition parameters of aluminum alloy 2219 (commonly used for spacecraft, the International Space Station, and the Space Shuttle). Different molten pool diameters were explored to examine regions where the process is surface tension dominated (with a small diameter molten pool) as compared to being dominated by gravitational forces (with a larger diameter molten pool), by building linear walls while varying processing parameters (translation speed, beam focus, beam power, and wire feed rate). In addition, the simple shapes allowed varying wire feed directions to explore process control associated with different wire input orientations (wire feeding into the leading edge, trailing edge, or at an angle with respect to the traverse direction). This set of experiments was designed to demonstrate that EBF3 processing is possible in a simulated microgravity environment. Subsequent analysis of the parts built will contribute to the understanding of the effect of reduced gravity on the microstructure, deposit size and shape. This understanding is important for developing a robust control system for reliable production of components in an automated process.

The primary objective of demonstrating that the EBF3 process can indeed be performed in 0-g was achieved. The equipment handled the power and acceleration variations that occur when powered with aircraft power and subjected to both side loads and turbulence. Analysis of the parts fabricated during the 0-g portions of the parabolas is currently underway to quantify the differences between EBF3 processing in 0-g and 1-g. In addition, the team is also preparing for a second flight in May to look more in depth at the guiding scientific principles driving the EBF3 process, as well as taking advantage of the 0-g by fabricating components in a 0-g environment that cannot be built in 1-g.