Joe Zawodny embraces technology almost as much as he does a clear, starry night that allows him time in his backyard to film the heavens.

Zawodny has computers, an 11-inch Celestron telescope, an industrial quality Web camera and his own observatory, a block off the Chesapeake Bay in Poquoson. 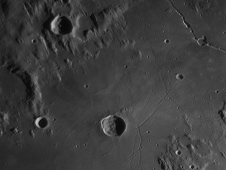 This image from Joe Zawodny shows Triesnecker, a crater on the moon in the center of the picture, with rilles (the lines) near it and lava tubes (the slight white, vein-like lines) around it.
Credit: NASA/Joseph Zawodny

He'll be looking for some familiar pictures, possibily of Triesnecker, a crater with tiny, almost white lines, looking like veins around it. And, he has learned, he'll see some of them. That he was told when he was informed of the show's postponement.

"Production companies search around FlickR, looking for things that are relevant to what they're doing," said Zawodny, whose photos of the moon, planets and other bodies in space, and of airplanes – along with his daughter's cat -- have been visited almost 300,000 times on the Web. "Two or three months ago, I was contacted by Flight 33 Productions. … They told me a little bit about the show. They said they were doing a show on mining the moon, and they were interested in photos of lava tubes."

The little white lines on the photos are rilles. Once they were conduits for lava on the moon. The lava flowed through tubes, spilled out the craters and hardened, forming "mare," or the moon's smooth surface. Eventually, some of the tube collapsed under assault from asteroids or wear from solar wind and became rilles.

"I gave them a couple of real close-ups," said Zawodny, an atmospheric scientist detailed to the Advanced Planning and Partnerships Office at NASA's Langley Research Center. "And I gave them one big one. I said, 'it's much higher resolution than you can show on TV, but what you can do is animate a flyby, like an orbit.' I have no idea what they're going to use."

Among the reasons given for NASA's revisiting the moon, beginning in 2020, and setting up an outpost is exploring for minerals. "The rocks and dust on the moon are rich in oxygen, titanium," Zawodny said. "That's stuff that, if you want to go to the moon and live, you want to utilize. Titanium is great, strong and lightweight."

The value of the lava tubes, besides residual minerals, is habitat. 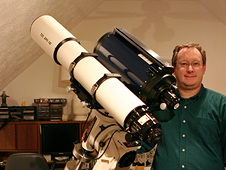 Joe Zawodny invests in equipment, but the software for processing the images he takes is free.
Credit: NASA

"The moon is exposed to the full fury of space, including solar winds," Zawodny said. "One of the first things you're going to do when you get there is figure out a space to protect yourself from these things."

Portions of the lava tubes that haven't collapsed are like caves. "It's the perfect habitat," Zawodny said. "In effect, you've got a pre-engineered space. You clean out a place, put in an inflatable habitat and you've got this place to go and work."

His own story is about a hobby learned in graduate school at the University of Colorado. He has embraced astrophotography since then, though its development in his life spans only the last seven years.

"It's been primarily driven by the digitals," he said. "As soon as digital cameras came out, personal photography-type cameras, it didn't take long for me to figure out that one way or another, I could hook one of those things up to the back end of a telescope."

Digital photographs offered him the instant gratification that film didn't.

As his interest grew, so did his collection of equipment, which includes a computer to aim the telescope by simply clicking on a picture of the sky. Once a particular target is identified, "I normally take 90 seconds worth of data at a time," Zawodny said.

The data is recorded on a computer as a movie from the Web cam, taking up one gigabyte of space for the 1,300 or so frames generated in those 90 seconds. That takes about an hour to process, using free software downloaded through the Internet.

"I'll say I want the best 100 frames, and it will sort them," he said of the software that processes the data. "It combines the best into one complete picture." 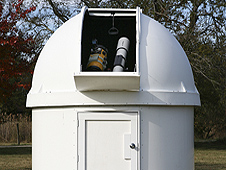 Joe Zawodny has built an observatory in the backyard of his home in Poquoson.
Credit: NASA

Because of the nature of the process, the content and quality of the picture is often a surprise, which is part of the fun of the hobby.

Zawodny is like a missionary, spreading the gospel of astrophotography to anyone who will listen; especially children in school classes that have heard him say, "Look up! Stop taking pictures of things on the ground! Look up!"

"The software is free," he said. "The stuff to capture the movie, almost any Webcam comes with that, so that's free."

Zawodny's pictures have been used by British educators and Indian textbook producers. He also shoots photos of airplanes, and his shot of a P-51 has been featured on another cable TV show.

The value of "Sci-Trek: Mining the Moon" is likely in its message of yet another reason for man to go back to the moon.

"It's a great topic," Zawodny said. "We need to get this story out in front of the public to say, 'we ought to go there. We were there and did some really cool stuff, but that was a long time ago. Now we know more and we're more capable. And we have a purpose.' "

So he'll be there when the show airs, even if TiVO isn't.

"I'll be sitting there, doing the old analog recording to the eyeball," Zawodny said. "If I get time, I could record it, I suppose. Should I record it? I'll probably burn a DVD or something."