Grow Text SizeShrink Text Size
Yuri's Night 2010 was Out of This World
By: Amy Johnson

The world's biggest space party returned to Hampton Roads on Saturday, drawing more than 1,500 people to the Virginia Air & Space Center where they danced to reggae beats, star gazed, ate, drank and got a little spacey.

Yuri's Night is an international event that began 10 years ago as a way to celebrate the achievement of Russian Yuri Gagarin, who on April 12, 1961, became the first person in outer space. Twenty years later, April 12, 1981, marked the launch of the first U.S. space shuttle. At last count, the number of Yuri’s Night parties is 211 in more than 67 countries.

In our neck of the woods, the space party -- which was a joint effort of the VASC and NASA's Langley Research Center -- kicked off at 7 p.m. with a line of people waiting to get in. Exhibits highlighting NASA contributions included robotic assistant "Robonaut," "Postcards from Space," and the Magic Planet.

Josh Wilkinson and Krystal Heemeyer from Virginia Beach were waiting in line at 6:45 p.m. to get it. They heard about the event from radio station 96X. The couple, who are both in the military, raided a thrift store to find space-themed costumes so they could enter the costume contest. 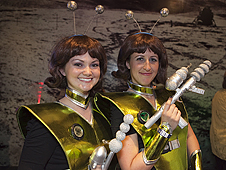 Click on the image for a larger view
Wilkinson, a self-professed "space junkie" was in an orange flight suit adorned with NASA stickers. Heemeyer went for the alien look and sported big silver sunglasses and silver hair.

Staci Dennis came dressed as the Milky Way -- outfitted with glitter, planets and space stickers. She came to Hampton Roads' inaugural Yuri's Night event last year and had such a great time that it was a no-brainer to come back this year.

"Space is awesome," Dennis said. "I used to want to be an astronaut when I was a kid, so this is like living out a childhood fantasy."

"This event is different, it's not just a party," added Dennis' friend Liz Fluharty. "They open up the Air and Space Center so we can see the exhibits, and we can also dance and have a good time."

There was definitely something for everyone. Reggae Band Nature’s Child kept hundreds entertained on the Virginia Air & Space Center's Observation Deck while DJ Jeyone mixed it up downstairs. 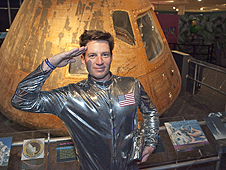 Click on the image for a larger view
Capoeira dancers took the stage with their eclectic form of martial arts-style dance as the Peninsula Astronomy Club offered up their high-tech telescopes to show partygoers Venus and Saturn Saturday night. The "Mars"tini lounge was also a big hit as was the VirtuSphere, which offered people a "virtual" walk in another world.

As for the icing on the cake, a space-themed costume contest at the end of the night brought out all kinds, including trekkies, aliens, robots, Boba Fett and even the "twins."

Dressed up as retro space girls, friends Ashley Granados and Cristalle Pronier from Newport News spent a week making their costumes. Their enthusiasm for Yuri's Night showed through in their "space guns," which were created from a child's fishing poll, duct tape and Styrofoam. The "twins" as they called themselves won second place in the costume contest taking home an IPod Touch. Boba Fett took first, winning an XBox 360.

Andy Hinkle found his costume online. His retro Mercury-inspired spaceflight was a hit. Though he didn't win the costume contest, Hinkle didn't mind. He came to Yuri's Night to celebrate space.