For the past seven years, Yuri’s Night celebrations have been an annual tradition around the world. In 2007, there were 198 parties in 51 countries on all seven continents, and 2009’s celebration is set to be even bigger.

Yuri’s Night honors art, science, music, technology and mankind’s curiosity, added with the spirit of collaboration that has made space exploration possible.

“Circling the Earth in my orbital spaceship, I marveled at the beauty of our planet. People of the world, let us safeguard and enhance this beauty – not destroy it,” said Gagarin upon his return to Earth as the first person in space. 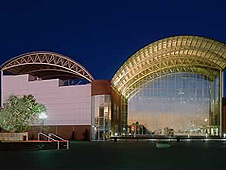 Yuri's Night will take place on April 4 at the Virginia Air and Space Center, located at 600 Settlers Landing Road in Hampton.

Whether in someone’s living room, a nightclub or a world-class science museum, Yuri’s Night events all have one thing in common: people who are excited about space exploration and who want to join together to celebrate it.

NASA Langley has a few people ready and willing to celebrate.

“I decided to get involved because Yuri’s Night is a great example of a 21st century outreach event,” said Vince Whitfield, head of the Yuri’s Night entertainment subcommittee and Public Outreach Specialist for Langley. Whitfield expects this event to be a success because of its location and also because it is the first of its kind being held in Virginia.

“This is a high-energy, participatory event! We’re getting all aspects of the community engaged; government, industry, academia and anyone else we can pull off the sidewalk,” said Rory Collins, lead organizer for Yuri’s Night.

Some highlights expected at Yuri’s Night at the VASC include an IMAX film, street performers, local artists and a laser light show.

Live musical performances will keep the party going, while art and science exhibits are available every step of the way to entertain and educate.

Guests are encouraged to dress festive. Costumes, especially costumes related to the themes of space exploration and cutting edge technology, are highly encouraged. Committee members are exploring ways to stay connected with some of the other Yuri’s Night celebrations taking place across the world.

A packed schedule will keep everyone on his or her toes and ready for what comes next. Food and drink vendors will be on-hand, including alcoholic beverages available to those 21 and up.

There are plenty of ways you can participate in Yuri’s Night. You can volunteer your time and efforts to making this event a success. If you're an artist, scientist or technologist, then you can bring your installation or technology to Yuri’s Night. Finally, you or your organization might want to help out and gain exposure by supporting the event.

Or you can simply come and celebrate space exploration with the rest of the world at the VASC on April 4, 2009. Invite your friends to come along with you!

“We look at Yuri’s Night as an opportunity to share our enthusiasm for science and exploration with our peers,” Collins said.

To get involved with Yuri’s Night, please contact Rory Collins by e-mail at rory.e.collins@nasa.gov