Grow Text SizeShrink Text Size
Robots or Webcomics? That was the Question.
By: Denise Lineberry

When Randall Munroe's work became his hobby and his hobby became his work, he decided it was time to make a change. The progression from doodling in his notebooks as a student at Christopher Newport University (CNU) to becoming a full-time webcomic happened in a matter of a few years. 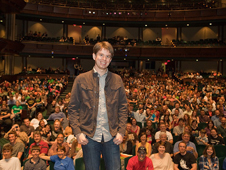 In the middle of that progression, after receiving his physics degree from CNU, Munroe worked at NASA's Langley Research Center as a programmer and roboticist. But as Christmas of 2006 approached, Munroe found himself packing up comic-based t-shirts sold from his website, www.xkcd.com, for 16 hours.

"I had to pick one," Munroe said of NASA and xkcd.

He chose the latter and moved to Boston with his assistant and continued to create comics and update his website for a growing fan base, which has since become international. xkcd is translated into several languages and has been recognized for several awards. Most recently, Munroe was nominated for the 2011 Hugo Award for Best Fan Artist.

Still, he takes time to revisit his past.

As Munroe walked to a spotlit podium set up on the ample stage of Christopher Newport University’s Ferguson Center for the Arts, the people in the packed auditorium roared. They had traveled from as far as Philadelphia and New York to hear him speak. Most of his audience was comprised of students from CNU.

Munroe had seen his "accidental" career begin to reveal itself at CNU when, in 2005, he began to scan his drawings and upload them to his website. He had been a student, just like the ones who sat before him, not sure of what the future would hold.

A steady theme of his talk was his ability to find, or create, humor in each day. That was the case then as a student, and now.

For April Fools, his comics were programmatically driven by specific geographic locations and website activity. For example, students at Virginia Tech saw a comic poking fun at students at the University of Virginia. And vice versa.

Munroe expressed delight in hearing and watching the conversations online from confused readers who took some time to realize they were seeing different comics.

Students and residents within a 6-mile radius of CNU, saw a comic strip which expressed Munroe's fear that he was actually being invited back to have his degree revoked. As a student, Munroe pulled a few tricks that caught the attention of many, including the university's president, Paul Trible.

But in the midst of the jokes came a serious message that arose from time with his wife, who is battling breast cancer: "When I was in college, I had a fear of cancer. But I want to tell you all that it's useless to walk around worrying."

Instead, Munroe suggested, "Things happen and you take small steps to make them better. I wish someone had told me that."

The point seemed to sink in and he began to discuss another one of his comics, titled "Grownups," which seemed all too familiar to his audience. In the strip, a stick-figured woman has decided to turn her apartment into a ball pit "because we're grown-ups now and it's our turn to decide what that means."

Munroe later met a reader who actually tried this after reading his comic. And found another who had created a calculator that would tell you how many balls it would take to fill a specific room. Using the new knowledge of where the balls where purchased from and the calculator, Munroe turned a portion of his own Boston home into a ball pit.

Stories about watching television from the pit and even taking a nap in it elicited boisterous laughter from the theatre.

On other occasions, his comics have inspired readers to dress as ninjas, play chess on rollercoasters and play guitar in the shower. In October 2007, a group of researchers at University of Southern California Information Sciences Institute conducted a census of the Internet and presented their data using a Hilbert curve, which they claimed was inspired by an xkcd comic that used a similar technique.

On this night, his talk seemed to inspire laughter, courage, unseen possibilities and maybe a few more ball pits.