The outside temperature, a sweltering 93 degrees didn't mean we have proof that the Earth is getting warmer.

The evidence, according to Bruce Wielicki, lies in the decades of climate records that are revealing how humans are "driving our system a thousand times faster than it's ever been driven before."

More than 200 NASA employees, interns and guests put their work aside Tuesday to listen to Bruce Wielicki, senior Earth scientist in the Science Directorate at NASA Langley, discuss climate change at at the Pearl Young Theater.

"We call it global warming, but it is best to call it climate change because everything is changing--not just temperature," Wielicki explained.

It is important to note that climate change is different from changes in weather. 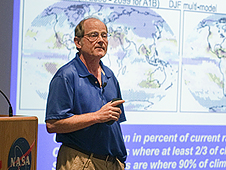 Bruce Wielicki makes certain that those listening in the Pearl Young Theater aren't confused by the temperature outside and climage change. Credit: NASA/Sean Smith


Wielicki explained that weather is the day-to-day fluctuation of temperatures and other atmospheric conditions. Considerable fluctuation can occur within a single day. For example, Tuesday's high was 93 degrees, yet the low was 72 degrees. Not only do people expect that level of variation, they also understand that it is nearly impossible to predict the exact temperature for a specific time of day.

Climate, on the other hand, is the long-term average of weather. Wielicki explained that averaging temperatures for a longer period of time and for more places results in less temperature fluctuation, making climate easier to predict than weather. The variation in temperature is so small that tenths of a degree matter significantly when monitoring changes in climate.

So, why is Earth's climate changing?

Wielicki said carbon dioxide is one of the major driving forces behind climate change. It acts as a blanket and traps radiation, or heat, in the atmosphere.

The average American adds around 50,000 pounds of carbon dioxide into the environment per year, Wielicki told his audience. And it remains in the atmosphere for hundreds, even thousands, of years.

According to Wielicki, even if humans stopped putting carbon dioxide into the atmosphere today, the lingering emissions would continue to warm Earth for many years to come.

He expects the effects of a warming Earth to be far-reaching, and Hampton Roads to have drastic changes.

One change is sea level rise, due both to the melting of glaciers and ice sheets and to water expanding as it is heated. Wielicki described a study from the Intergovernmental Panel on Climate Change (IPCC) in 2007 that focused only on expanding ocean waters—not glaciers and ice sheets melting. The results of that research showed that by 2100 sea level will rise about one-half to 2 meters. A 12-foot increase in water levels, consistent with what Earth experienced in its last warm period, would put nearly the entire Peninsula under water.

He also said that, while total precipitation would not change much due to the constant impact of the sun on evaporation, wet areas are expected to get wetter and dry areas dryer.

The question now, Wielicki said, is how are humans going to address the effects of climate change?

Wielicki said the first step is educating the pubic and policy makers. He also explained that, from personal experience, little things like fuel-efficient cars, having ceiling duct work done and heating your home efficiently can truly go a long way to reduce individual carbon dioxide production.

It is also important, according to Wielicki, to educate oneself with accurate information.

"You can't believe a single scientist, but you can believe thousands of scientists," he said, referring to several peer-reviewed science organizations–such as the IPCC group–that have arrived at the same conclusion: Climate change is happening.