In the corner was a green and white flag with a red, fire-breathing, flying dragon symbol. The flag is relatively new. The dragon is centuries old, as old as Wales itself.

"We're quite an old country," said Bill Fraser, "and quite a new country."

Representatives of 40 companies and academic institutions of the new Wales stood to deliver sales pitches Tuesday in the Reid Conference Center, where International Business Wales came to call on NASA Langley.

International Business Wales is an arm of the country’s Assembly Government. Its members’ spiels on Tuesday were for sensors and software, cranes and contractors, medical equipment and machinery, and everyone came to sell products in the United States. 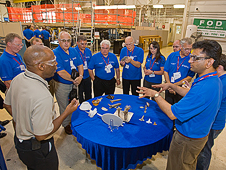 Click image to enlarge
They also came to learn how to do business with this country's government and its myriad agencies. "Nobody is going to sign anything today," said Fraser, who headed the delegation, which also will have spent time with Boeing, the Defense Department and the Department of Homeland Security before it leaves the U.S.

"If everyone finds a person at NASA who is willing to listen, and Welsh companies go away with an idea of an opportunity, then it's a success," Fraser said of Tuesday's trip.

It began about six months ago. Fraser contacted with Scott Horowitz, a former NASA astronaut and now an agency contractor and Welsh consultant.

There were Welsh companies doing business with aerospace and defense firms. How could that happen more frequently in the U.S.?

"I thought about NASA headquarters," Horowitz said, "and realized that wasn't the answer. And then I thought about Langley. It's close by (Washington). NASA has 10 agencies. Langley is sort of a conglomerate of what they do across NASA."

Horowitz visited Wales a few weeks ago in preparation for this trip. "It's a country of three million people and 30 million sheep," he said laughing. "I had some good lamb there."

He also found a surprising number of companies in the technology field "in some rural places," Horowitz said. "I can't tell you how impressed I was."

Horowitz warned the assembly Tuesday that "you can't see all of Langley in a day," before the Welsh listened to presentations on advanced materials, nondestructive evaluation sciences and aeronautics systems, then toured Building 1232A to see flight test articles, Building 1225 for advanced machine development, the gantry and the lunar habitat and surface manipulator.

By day’s end, the group looked as though it had tried to see the entirety of Langley. Hot and happy, the Welsh trooped back into the Reid Conference Center for a de-briefing and farewell.

“It was terrific,” said Frank Marsh, marketing director of the Manufacturing Engineering Center, part of Cardiff University in Wales.

“I hope so,” he said. “It all depends on the follow up. I certainly intend to contact the people I met today in the future.”

“I think we opened some doors,” he said. “I can see some synergies here.”

That was the consensus of the group as it boarded a bus for a trip back to Washington, with a stop in Williamsburg on the way for dinner.

“Is the food good there?” Marsh asked.

Told yes it was, and what looked more important to an obviously tired group on a hot day, the beer would be cold.

“Excellent,” he said, smacking his lips and smiling.