Grow Text SizeShrink Text Size
A Look to the Future, a Part of Langley's Past
By: Jim Hodges

Video from the ribbon-cutting ceremony including samples from previous splash tests.

An audio slideshow highlighting the Hydro Impact Basin and the ribbon-cutting ceremony.
› View this video in 1080p HD

That it has been doing business for two months now – there already have been three drop tests of the Orion Multipurpose Crew Vehicle (MPCV), plus an early test to determine drop procedures – is not an issue.

This is a "bridge to the future," Lesa Roe, Langley's center director, told a group standing in sweltering heat at the Gantry. "It's commemorating the next chapter in our (space exploration) legacy."

Roe asked the assembly to imagine decades ago, when a vehicle containing astronauts Neil Armstrong and Buzz Aldrin – the first men to step on the moon –- hung from the Gantry to train for the final 150 feet of their descent to the lunar surface. And, she reminded, Armstrong said of that landing in Apollo 11 "was just like we practiced at Langley."

It's what she and those who work at the Gantry and in support of the facility would love to hear in a future in which space exploration ranges far out of low-Earth or even lunar orbit, to a distant asteroid and, eventually, a planet.

More immediately, that future will include six weeks of adjustments to Water Basin testing procedures at the Gantry, six more tests of the MPCV boilerplate test article this year and then a quiet period while the Orion ground test article is readied at Lockheed-Martin in Denver and ferried to Langley.

That could take as long as a year, said Mark Kirasich, deputy manager of the MPCV, Orion Project Office at NASA's Johnson Space Center. 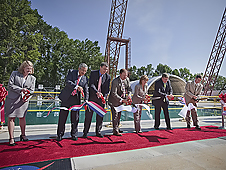 The ground test article is a step forward from the boilerplate.

"It's a full-scale, pre-production version of our spacecraft," Kirasich said. "It's the highest-fidelity crew module we have to date."

It's undergoing testing in Denver that could go into early 2012. Before the MPCV comes to Langley, its heat shield quality is being enhanced to make it closer to that which eventually will go into space.

"Even though we could bring the ground-test article here, it would not be particularly valuable testing until we get the heat shield," Kirasich said.

The Langley work with the ground-test article will go a long way toward getting it ready for an unmanned flight test in late 2013 or '14, Kirasich said.

The MPCV will actually be human-ready in 2017, he added. What happens after that evolve in sync with NASA's development of a new space launch vehicle to take the capsule aloft.

All of that is dependent on the wherewithal to make it happen. Rep. Bobby Scott (D-Va. 3rd) said Tuesday that "I believe that the completion of this project is only the start of the tremendous potential expansion at NASA Langley." 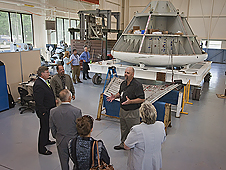 The problem with the new push toward in the aftermath of the end of the space shuttle program is that "you don't get there free," said Scott, acknowledging the difficulty in finding money for technological investment in today's financial climate. "You have to find room in the budget, and some of the budget choices we're making now don't have a lot for those investments and we have to change that."

"Space exploration, innovation and development in manned space flight, I think has been an icon of American innovation and technology," he said after the ceremony. "I hope it stays an icon. It really is critical for us to continue these programs, even during these tough times.

"I think Orion has the potential to bring us to a next quantum leap in technology, and I want to make sure that we're remembering that (in Washington)."

For now, at Langley, there's a new test facility with an eye to that future.

"We've come full circle," said Damodar Ambur, who heads the center's Ground Test Facilities Directorate. "We were testing to land on the moon (at the Gantry). Now we're testing landing back on Earth."