Grow Text SizeShrink Text Size
To Sleep or Not to Sleep?
By: Denise Lineberry

It was January 28, 1986, and many Americans were glued to the television to witness the Space Shuttle Challenger take off. Sadness and shock soon followed when the shuttle disintegrated over the Atlantic Ocean.

Media coverage of the accident was extensive: One study reported that 85 percent of Americans surveyed had heard the news within an hour.

A seemingly missed possibility was pointed out to a NASA Langley crowd recently by Navy Capt. Nick Davenport, who quoted from, "The Promise of Sleep" by William Dement: "… But not well known at all is the fact that the Human Factors Subcommittee attributed the error to the severe sleep deprivation of the NASA managers. This conclusion was only included in the committee's final report, which only noted that top managers in such situations are generally the ones who sacrifice the most sleep." 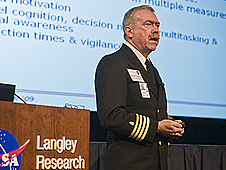 Capt. Nick Davenport serves on active duty in the U.S. Navy as the command flight surgeon to the Naval Safety Center in Norfolk. . Credit: NASA/Sean Smith

Click image to enlarge
The Rogers Commission Human Factors Findings stated, "The willingness of NASA employees in general to work excessive hours, while admirable, raises serious questions when it jeopardizes job performance, particularly when critical management decisions are at stake."

According to Davenport, one way to control fatigue is through individual education and awareness. That's why Davenport visited NASA Langley for the "Strategies for Your Future" symposium. He is a NASA veteran. From 1967 until 1970, he worked as an aerospace engineer at Johnson Space Center. "I worked on the Lunar Flying Vehicle and the Skylab," he said. "It was my first job and I loved it."

A key point made by Davenport in the Reid Conference Center was that fatigue produces broad declines in multiple measures of performance. Those declines affect our mood and motivation, high-level cognition, decision-making, multitasking, situational awareness, basic reaction times and vigilance.

"Fatigue is under-recognized as a mishap causal factor," Davenport said. "There are no simple measurement tools for fatigue. If we can't measure it, we miss it."

Although Davenport specializes in aviation mishaps, with particular emphasis on the special physiological and human factor hazards unique to aviation, he is particularly interested in sleep deprivation and fatigue as a pervasive and widely under-recognized root cause of mishaps.

According to Davenport, sleep is a physiological requirement for survival. Sleep-deprived animals die from insulin resistance, immune system failure and sepsis after two to three weeks without sleep.

He also stated that a "normal" amount of sleep is 8 to 8 ¼ hours and that maintaining performance on a minimum of five hours of sleep is a myth. "Sleep cannot be 'banked,' but sleep deficits accumulate," Davenport said.

Humans get two hours of performance for each one-hour of sleep. If there isn't enough sleep to cover performance, the brain finds a way of getting the sleep it needs. "It's almost as if the brains says 'if you won't give me sleep, I'll sneak it in when you're not looking,' " Davenport said.

"With fatigue, the brain's awake state becomes unstable. It lapses and microsleeps to interrupt performance."

That interruption doesn't always come at an opportune time. A more obvious case of the danger in sleep deprivation is a driver who falls asleep behind the wheel.

Also, tired individuals impair their own recognition of fatigue and its impact on performance. Davenport compared this to "the drunk at the party who can't determine if he's capable of driving home."

Davenport is not alone in realizing the effects of fatigue and sleep deprivation. Naval aviators have cited sleep and duty cycles as a serious concern. Fatigue is also identified as a problem with the Department of Transportation (DoT).

The possibilities for fatigue are endless with the hustle of everyday life and the responsibilities we take on at work or at home.

Regardless … "Sleep is not optional," Davenport said. "It's something we need to perform well."