Grow Text SizeShrink Text Size
Colloquium: The Answer to Highway Gridlock Is in the Air
By: Jim Hodges

The pictures on the screen were stark reminders of the highways we drive, and the supporting statistics backed them up – of time wasted in traffic, of a nation that lays 40 million miles of asphalt every year, of the 5.6 barrels of oil to produce each mile of that asphalt.

Of 5.7 billion gallons of fuel wasted in traffic, of a seven-fold increase in traffic delays over the past 30 years, of 22 percent of all restaurant meals being ordered through a car window.

Add individual anecdotal evidence, and the problem is clear. "We have to find a solution to the car insanity," Brien Seeley told the May Colloquium assembly Tuesday at the Reid Conference Center.

Then he offered a solution. No, THE solution. 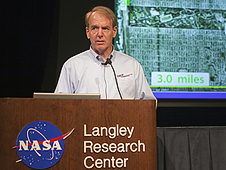 Brian Seeley tells the May Colloquium audience that highway gridlock can be beaten by Vertical/Extreme Short Take Off and Landing personal air vehicles. Credit: NASA/Sean Smith

Click on the image for a larger view
"Green, quiet V/ESTOL (Vertical/Extreme Short Take Off and Landing) aviation is the only solution to gridlock," Seeley said.

Seeley, a Santa Rosa, Calif., eye surgeon, appeared as president of the Comparative Aircraft Flight Efficiency (CAFÉ) Foundation, which is a group of innovative volunteers that has set standards -- and formulas to meet those standards -- for efficient aviation. It is administering a NASA-supported Green Flight Challenge next year in which teams are expected to meet a 200 passenger-mile-per-gallon standard over a 200-mile trip at speeds up to 100 mph.

The best performance earns a $1.5 million prize, and so far, eight teams are entered, with several different fuel options represented. Among them: hydrogen, electricity, diesel and biodiesel. The field will top out at 16 for the July 2011 event.

Seeley came to aviation through his father-in-law. While in medical school at the University of California at San Francisco, Seeley took two weeks of flying lessons and earned a license.

"I was hooked on the idea of the freedom to go up and down and left and right, wherever you wanted to go, and to get there quickly," he said. "To have this privilege seemed like a dream."

He became hooked on doing it more efficiently after buying a four-seat Mooney airplane that he modified to increase its cruising speed by decreasing its drag.

"We decided to have a kind of a race, from California to Wisconsin for the Oshkosh Air Show," Seeley said. "During this, we noted we were flying at the same speeds in formation, but at the fuel stops, I was purchasing twice as many gallons as he was. He was carrying two people, I was carrying four people.

"So we worked out a notion that there was a relationship between speed, miles per gallon and payload. After a lot of review of mathematics, we determined that we could derive a formula and have a new kind of race: an aircraft fuel efficiency race."

In 1981, it became the first CAFÉ standard race and a movement was on.

It has reached a point where Seeley is extolling the value of quiet, electric-powered personal air vehicles in pocket airports in communities as a way to beat the freeway madness. Take 4 percent of the cars off the road, he said, using a Michigan statistic, and the problem is solved.

Put those 4 percent of drivers in a personal air vehicle. Electric motors beat the noise. Extreme Short Take Off and Landing techniques beat the space issue. Technology makes the vehicles easier to fly. They even have their own paths to beat aerial traffic.

"The sky theoretically can be divided into an almost limitless number of freeway lanes, overpasses, underpasses, off-ramps," Seeley said. "A computer system will be able to allocate in real time what might be considered a 'wormhole' through the sky. It's a 4-d pathway, the fourth-dimension being time.

"The 'wormhole' that takes you from Hampton to Richmond might be a different shape for each of the people who make that commute. Or it could be a repeatable time frame in which people are directed with a certain time spacing, one ahead of the other."

The scenario works for trips up to about 250 miles. The door-to-door speed at that distance, including that part spent on a 540 mph airplane, is about the equivalent of a 55-mph drive – if you could drive 55 mph in gridlock.

The answer, Seeley said, is the personal air vehicle, powered by electricity, landed down the block from your home at a short-runway, community-funded airport.

There is no timeline, though certainly the longer it takes, the greater the gridlock and resulting energy waste.

Until then, gridlock statistics will just mount, and Seeley already has plenty of them.