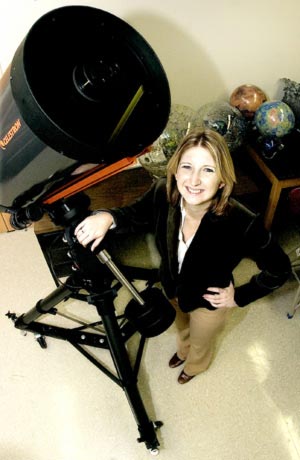 Megan Seals wanted to be an elementary school teacher -- on Earth. But last year, all that changed for the 22-year-old James Madison University graduate student. Now, Seals says she wants to take her teaching experience to the next level -- outer space. And these days, she says, her dream isn't unobtainable. In 2004, Seals completed a summer internship here at NASA's Langley Research Center. Seals was a LARSS student in the DEVELOP program.

Seals recently became the youngest official with the Teachers in Space team, a privatized space-bound network based in Scottsdale, Ariz., and managed by the Space Frontier Foundation. Her group, Seals says, aims to pay for teachers from every state in America to experience a brief suborbital space flight and share the experience with everyone they know.

With the help of her team members -- composed of heavy hitters from the privatized space industry and aeronautical community -- Seals will write curriculum for the teachers who will integrate their space experiences with their core classes. The first flight, Seals says, is scheduled for 2010.

"They say it's just the most humbling experience ever to see the whole Earth right there in front of you because you can see that we really are in this together," said Seals who is originally from Big Stone Gap. "I love adventure and I know that going to space will be an unforgettable experience for anyone who gets to go."

Seal's involvement within the space community began in May 2003. As an undergraduate student, Seal began work at a NASA Science Mission Directorate Applied Sciences Program, a student-run program based in Wise County, where she's from. For the last three years, she and several other students from all over the country gathered to simulate a hypothetical chemical attack on Richmond.

Though not directly related to space travel, her presence in the group didn't go unnoticed by space exploration gurus. Seal's mentor, J. Jack Kennedy Jr., was one of the people that Teachers in Space contacted about the new project. Who could help out, they asked him. Kennedy's answer was the JMU elementary education major. Over the coming months, Seals continued her education at JMU while attending various space conferences all across the country.

Last week, she attended a conference in New Mexico, geared to recruit interested teachers. For now, Seals will graduate with her master's in elementary education in the spring. Although she’ll continue to volunteer with Teachers in Space, Seal says her immediate future lies in an elementary school -- on the ground.

"Kids just love space," Seals said. "They get so excited, it's ridiculous. I want to inspire kids and I think space is a great way to do it."