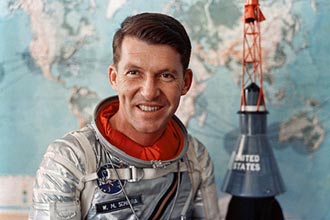 Scallion, 83, worked with each of the original Mercury 7 astronauts, including Schirra. Together, they worked on simulations and practice runs before the first U.S trips into space. "We simulated worldwide orbital ground stations, simulated a four-orbit mission real time. It takes four-and-a-half hours to do that," says Scallion. "It's like putting together a TV show. You're producing something. You have to write scripts and send them out."

The lead "actors" in those scripts were the original Mercury astronauts. "I worked with all those seven astronauts, knew them all personally, played poker on the airplane with Wally Schirra and Deke Slayton," reminisces Scallion. "The rest got into F-102s and flew down to the Cape, but Schirra and Slayton would get on the airplane with us out here at base operations, because they knew we had a poker game going. It was fun playing with them." 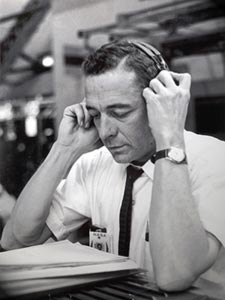 The following was excerpted from a May 3 message from NASA Administrator Michael Griffin to all NASA employees:

"Today is a sad day for NASA and our country, as we mourn the passing yesterday in California of astronaut Walter "Wally" Schirra. With Wally's passing, we at NASA note with sorrow the loss of yet another of the pioneers of human space flight.... Wally is remembered in the close circle of the space community as the pilot who flew a "textbook flight" on his Mercury mission in October 1962. But Wally's space flight career went well beyond Mercury; on his next flight, in December 1965, he commanded the Gemini 6 mission (which included) the first rendezvous in space ... completing one of the key steps along the path to the moon.... Wally's last flight was Apollo 7, the first to be conducted in the aftermath of the disastrous Apollo 1 fire. This flight was another enormous success, accomplishing "101 percent of its objectives," according to the post-flight debrief. It also made Wally the first man to command three different spacecraft, and the only one to fly Mercury, Gemini and Apollo.... We who have inherited today's space program will always be in his debt."