Grow Text SizeShrink Text Size
Geoengineering: Why or Why Not?

History tells of volcanoes that have cooled the earth, of gradual global warming over the past 100 years interrupted by eruptions at Katmai, Alaska, in 1912 and Pinatubo, Phillipines, in 1991 that sent effluence aloft that nearly blocked out the sun. 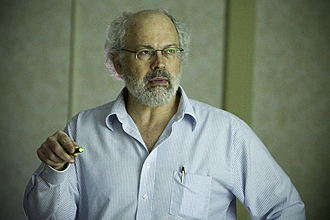 Image to right: Rutgers professor Alan Robock says that geoengineering should be studied and that he is undecided as to whether its benefits could outweigh its consequences. Credit: NASA/Sean Smith.

Why not inject aerosols into the stratosphere to repeat the effect, slowing the inexorable warming that is melting away the ice at Earth's poles, among other effects on nature?

It's called geoengineering, and Alan Robock spoke Friday before an overflow crowd at the Science Directorate of the potential benefits and consequences of doing just that.

"Freshwater precipitation goes down after a big volcanic eruption," said Robock, a professor of climatology at Rutgers and a member of the Intergovenmental Panel on Climate Change that shared the 2007 Nobel Peace Prize with former Vice President Al Gore.

Robock's lecture was part of Langley's "Green Series," and he called it: "The Science and Politics of Geoengineering? Smoke and Mirrors."

It spoke to both science and politics, and a bit of history.

Even further back in time, to the Laki, Iceland, eruption of 1783-84, the effect produced killer droughts in Egypt, based on the Nile River's levels at Aswan, where records have been kept since 622 AD. There also is anecdotal evidence of droughts in India and China because of Laki.

Still, with data piling up of global warming, studies of geoengineering continue, many of them using NASA climate models.

But, he added, he began thinking of reasons that would inhibit the concept while at a conference at NASA's Ames Research Center in November.

He has come up with a list of 20, ranging from the moral to the clinical to the technological.

For example, geoengineering could have a similar effect to the volcanic eruptions, producing regional climate change that could induce droughts.

"And how cold do we want it?" Robock asks rhetorically. "Who decides? Whose hand is on the thermostat?"

Possible ozone depletion and increased oceanic acidity could develop. Effects on plants are still unknown, and the possibility of human miscalculation of the desired aerosol quantity to inject into the stratosphere is very real.

There are more unknowns than knowns about the process, and one of those unknowns is how to do it in the first place.

Beyond that, solar power has been touted as a big piece of a puzzle that could end fossil fuel dependence and clean up the atmosphere. But after injecting aerosols into the stratosphere, "there would be a 20 percent decrease in solar energy," Robock said.

"I guess you could say that any one of those (20) reasons is reason enough not to do it," he added.

Perhaps more personally, though, could the Earth's inhabitants handle the end of a blue sky?

Robock often referred to a reproduction of a classic by Edvard Munch, a Norwegian artist who in 1893 painted a woman in distress under a sky of grays, oranges and yellows. Munch remembered those colors from effluence sent aloft by Krakatoa, which erupted in 1883.

The picture is entitled "The Scream."