Actress Cameron Diaz walked up a ramp in a long coat, then back down with cameras doing their work.

And another few seconds of "The Box" was shot on Monday in the frigid Full-Scale Tunnel on NASA Langley's East Side.

Lane Kelly tried to describe the process of making a movie after watching son Richard work as the director.

"If you can imagine dissimilar data being brought together and somehow producing a project, you get the idea," he said.

The "dissimilar data" analogy brought back Kelly's background. He was returning to NASA Langley, from which he left in 1984 after working for 14 years as a physicist on such projects as Mars Viking. He later worked in robotics and spent time as a consultant before moving to his current job, developing projects for a business magazine. 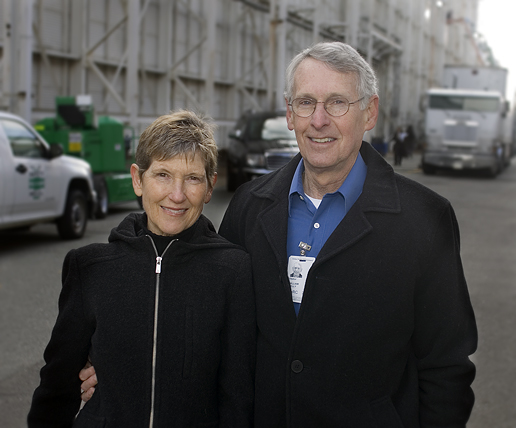 Image above: Ennis and Lane Kelly are the parents of Richard Kelly, producer of 'The Box.' Lane worked at NASA Langley for 14 years. Credit: Sean Smith.

"I worked in Building 1202," Lane said, remembering more than two decades ago. "The first floor was the visitors center then."

Upstairs was the Instrument Physics Research Section of the Flight Instrumentation Directorate. Kelly worked on cameras.

On Friday, he'll work in front of one.

"Richard wanted him to have a part," said Ennis Kelly, who failed to add that she also had an "extra" part in "The Box." Her on-screen segment was shot in Boston.

She probably didn't mention it "because the movie is shot in the '70s, so she had to have a beehive hairdo," Lane said, laughing.

"I'm supposed to be a NASA employee on a panel," he said. "I sit there and nod at the appropriate time."

And how does all of this fit into "The Box?"

"We don't know," Lane Kelly said. "Richard won't let us read the script. I think we're going to have to find out the same way everybody else does: by paying $8 at a movie."

"I think part of the deal he has with Warner Brothers is to keep as many people in the dark as possible to get more admissions at the theater," Kelly said.

The short story doesn't deal with NASA. That was the screenwriter/director's adaptation.

"He used us for 'the background' of the two main characters," Lane said of his son and NASA's role in the production. "I mean, they aren't us. But he used our background. I was surprised."

Richard Kelly was 11 when his father left NASA Langley to move to Richmond to work with a robotics firm. Kelly eventually went to the University of Southern California to study art and writing, eventually graduating from the university's prestigious film school.

"I didn't know about all of this," Lane Kelly says of the movie business. "I thought to make it, you had to know a lot of people to call in Hollywood. We lived in Hampton and Poquoson, then Richmond. I don't even know the area code in Hollywood."

So he takes pride in his son's success.

"It's a fascinating business, now that I understand it a little," Lane says. "Getting all of the people together, the lighting, the electricity, the actors together. It's like a system here.

"It's like a system we had in Viking. You get a lot of talented people together working on different things. Nobody knows everything. Well, only a few people know everything. And you put it all together and you have a successful mission.

"But you don't know if it's good until the end. You don't even know it's good when you're sitting in the theater watching the finished product."

What you do know is how what you did weeks and months earlier fits in the overall system, in this case, the story.

And you know you had the same credits that you had before the film process began.

"We're the producers of the director," said Ennis Kelly, smiling.

So they spent part of Monday at Langley watching their production direct "The Box."