Grow Text SizeShrink Text Size
An Improving Ozone Layer, Something to Sing About
By: Denise Lineberry

For more than 30 years, researchers at NASA Langley have been measuring the stratospheric ozone layer, which extends from about 10 to 30 miles above the Earth’s surface and protects life on Earth from the sun's harmful ultraviolet (UV) rays.

Lamont Poole, a senior research scientist with Science Systems and Applications Inc. at NASA Langley, performed an ozone song at a Science Cafe at Marker 20 in Hampton. Poole plays leisurely with his band, "The Harris Creekers." Credit: NASA/Denise Lineberry

Human-produced chemicals known as chlorofluorocarbons (CFCs) -- invented in the early 1890s, and first used in the 1930s as refrigerants and propellants for sprays –- have played a major role in upsetting the natural balance of the ozone layer.

The Earth's natural ozone shield has been gradually depleted by chemical reactions involving chlorine, which is released from CFCs in the stratosphere. With ozone depletion, more UV radiation reaches the ground, leading to health and environmental problems.

As Lamont Poole, a senior research scientist with Science Systems and Applications Inc. at NASA Langley, explained at a December Science Café at Marker 20 in Hampton, the best-known example of ozone depletion is the springtime Antarctic ozone "hole" which first appeared in the early 1980s. 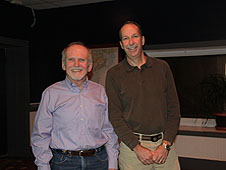 Lamont Poole and Mike Pitts, senior research scientists who work at NASA Langley, spoke to a Science Cafe crowd at Marker 20 in Hampton about record ozone loss in the Arctic. Credit: NASA/Denise Lineberry

"When observed from space, the severe thinning of the ozone layer over Antarctica looks like a hole," he said. "It appears as if you could look through it."

According to Poole, Langley has been a leader in polar stratospheric cloud (PSC) research for as long as it has measured ozone. Because of the cold temperatures in the Arctic and Antarctic stratosphere during winter, PSCs are common. Chemical reactions that occur on PSC particle surfaces produce high levels of reactive chlorine species that can lead to a large decrease in ozone.

In the 2010-2011 Arctic winter, there was an anomalously strong stratospheric polar vortex, coupled with an unusually long period of cold temperatures.

"For the first time, all the right ingredients came together at the right time to produce severe ozone loss in the Arctic," said Mike Pitts, a senior research scientist at NASA Langley.

Pitts and Poole were two of the authors of the paper reporting the findings about last winter's unprecedented ozone loss in the Arctic, which was published in the journal Nature in October 2011.

Still, researchers remain confident that, overall, the Earth’s ozone layer is improving and will continue to do so.

Since the Antarctic ozone hole was first discovered in 1980, nations have joined forces to restore the ozone to a better state. In 1987, The Montreal Protocol on Substances That Deplete the Ozone Layer, an international treaty, was put in place to protect the ozone layer by phasing out the production of numerous substances believed to be responsible for ozone depletion. More than 190 nations agreed to ban ozone-depleting chemicals.

To learn more about the Science Cafe, please visit:

Researchers remained focused on improving the ozone layer. In 1995, the Nobel Prize in Chemistry was awarded jointly to Paul Crutzen, Mario Molina and Sherwood Rowland "for their work in atmospheric chemistry, particularly concerning the formation and decomposition of ozone."

According to Poole and Pitts, chlorine compounds in the stratosphere are decreasing, and chemistry-climate model projections show that global ozone should return to 1980 (pre-ozone hole) levels by about 2050.

"In the coming decades, we expect a continuing decrease in stratospheric chlorine and continued improvement in ozone levels," said Poole. "Without the implementation of the Montreal Protocol and its follow-on amendments, we would have been going in the other direction."