The two new postage stamps are part of the U.S. Postal Service's 2006 definitive stamp program. Both feature computer-generated images of the X-15; images which were created by researchers at Langley's Geometry Laboratory in the early 1990s.

The new stamps are the next in a long line of postage stamps that have commemorated NASA accomplishments.

Stamp Released: February 20, 1962 - On this date John Glenn became the first American to orbit the Earth. At 3:30 p.m. the Port Canaveral Post Office in Port Canaveral, Fla., released the Project Mercury stamp - the first U.S. commemorative stamp issued at the same time as the event it celebrated. The stamp project was completed behind locked doors in case the mission did not succeed.

The artists that worked diligently to create this stamp did so under a veil of secrecy.

Just over 400 people knew the secret; about half of them postal inspectors. 305 post offices across the country received the secret stamps, and were not allowed to open them until instructed to do so.

This stamp shows the artist's rendering of John Glenn's capsule as it orbits the Earth and prepares to re-enter the atmospher.

Stamp Released: September 29, 1967 - Gemini 4 was the second crewed mission of the Gemini series and carried James McDivitt and Edward White on a four-day, 62-orbit, 98-hr flight from June 3 to June 7, 1965. The mission included the first American spacewalk.

The objective of the mission was to test the performance of the astronauts and capsule and to evaluate work procedures, schedules, and flight planning for an extended length of time in space.

Depicted on this stamp is an artist's rendering of Astronaut Ed White as he performs the first American spacewalk. 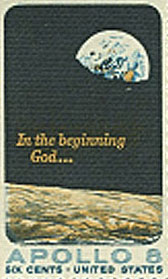 Stamp Released: May 5, 1969 - The Apollo 8 spacecraft was the first of the Apollo series to successfully orbit the moon, and the first manned spacecraft to leave Earth's gravity and reach the Moon.

The mission achieved operational experience and tested the Apollo command module systems, including communications, tracking, and life-support, in cis-lunar space and lunar orbit, and allowed evaluation of crew performance on a lunar orbiting mission.

The crew photographed the lunar surface, both farside and nearside, obtaining information on topography and landmarks as well as other scientific information necessary for future Apollo landings.

On Christmas Eve, Dec. 24, 1968, the crew of Apollo 8 read the bible's account of creation, from the chapter of Genesis. This stamp commemorates the historic mission and reading. 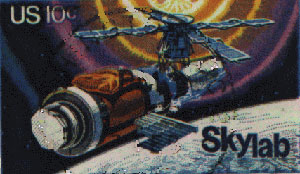 Stamp Released: May 14, 1974 - Skylab (SL) was America's first orbitting space laboratory and was composed of five parts: the Apollo telescope mount (ATM), the multiple docking adapter (MDA), the airlock module (AM), the instrument unit (IU), and the orbital workshop (OWS).

The Skylab was in the form of a cylinder, with the ATM being positioned 90 degrees from the longitudinal axis after insertion into orbit. The ATM was a solar observatory, and it provided attitude control and experiment pointing for the rest of the cluster.

This stamp shows an artist's rendering of Skylab's five components connected as they orbit Earth.

Stamp Released: Feb. 28, 1975 - Pioneer 11 was the second mission to investigate Jupiter and the outer solar system. It was also the first to explore Saturn and its main rings.

Pioneer 11 used Jupiter's gravitational field to alter its trajectory radically as it passed close to Saturn, and then followed an escape trajectory from the solar system.

Issued in Mountain View, Calif., this stamp depicts an artist's rendering of the Pioneer craft collecting data as it flies past Jupiter and it's moons.

Mariner 10 was the first spacecraft to visit Mercury. It flew by Mercury three times in a retrograde heliocentric orbit and returned images and data on the planet.

Mariner 10 returned the first-ever close-up images of Venus and Mercury. The primary scientific objectives of the mission were to measure Mercury's environment, atmosphere, surface, and body characteristics and to make similar investigations of Venus. Secondary objectives were to perform experiments in the interplanetary medium and to obtain experience with a dual-planet gravity-assist mission.

This stamp shows an artist's rendering of the Mariner 10 craft getting a close-up view of Venus. 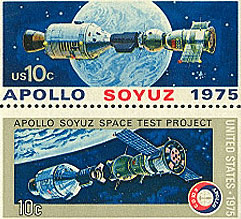 Released: July 15, 1975 - The United States and the U.S.S.R. launched an Apollo spacecraft and a Soyuz spacecraft, respectively, as a joint effort called the Apollo-Soyuz Test Project (ASTP). The Soyuz spacecraft was launched first, with a two-man crew who maneuvered their spacecraft into a docking orbit.

The Apollo spacecraft was launched 7-1/2 h later, with a three-man crew who placed their spacecraft into a proper configuration for docking with the Soyuz spacecraft. The docking of the two spacecraft occurred on the third day. After docking, crew transfers took place, with the Apollo crew first visiting the Soyuz.

This mission was part of an agreement signed by President Nixon and Soviet Union Premier Kosygin on May 24, 1972. The mission allowed astronauts to test the new U.S. docking module and opened the door for future internationally manned missions and possible international space rescues.

This stamp depicts two different renderings of the Apollo-Soyuz Test Project as it orbits Earth.

After orbiting Mars and returning images used for landing site selection, the orbiter and lander detached and the lander entered the martian atmosphere and landed at its selected site. The orbiters continued imaging and other scientific operations from orbit while the landers deployed instruments on the surface.

The fully fueled orbiter-lander pair had a mass of 3527 kg. After separation and landing, the lander had a mass of about 600 kg and the orbiter 900 kg.

This stamp was issued in Hampton, Va., as part of the 2nd anniversary of the first mission to land a spacecraft on another planet, and depicts the Viking craft as it orbited Mars. 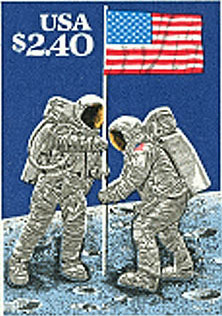 Released: July 20, 1989 - Apollo 11 was the first mission in which humans walked on the lunar surface and returned to Earth. On July 20, 1969, Astronauts Neil A. Armstrong and Edwin E. "Buzz" Aldrin landed in the Moon's Sea of Tranquility while the Command and Service Module, piloted by Michael Collins, continued in lunar orbit.

During their stay on the Moon, the astronauts set up scientific experiments, took photographs, and collected lunar samples. They took off from the Moon on July 21 and returned to Earth on July 24.

This stamp was released as part of the twentieth anniversary celebration of Armstrong and Aldrin's historic achievement, and features an artist's rendering of the two astronauts planting an American flag into the moon's surface.

Pathfinder's land rover, Sojourner, travels at a speed of only 0.4 inches per second, and measures approximately two feet by one and one-half feet by one foot. Remote control commands from Earth take about 10 minutes to reach Sojourner.

This stamp features an image that was beamed back from Pathfinder showing Sojourner as it prepared to explore the Martian landscape.

To read more about the X-Planes stamps click here.