Grow Text SizeShrink Text Size
Melvin Will Get Another Flight Into Space
By: Jim Hodges

After coming back to Earth from his flight into space on Atlantis' STS-122 mission in February, Leland Melvin had talked of doubts of a return trip.

There were only a limited number of flights left in the Space Shuttle program, and there was a long list of people yet to fly.

"I just don't know," he said, then added somewhat wistfully, "I'd like to."

His wish has come true. On Tuesday, Melvin, who worked at NASA Langley before entering the astronaut program, was named to the crew of Discovery's STS-129 mission, scheduled for October, 2009. 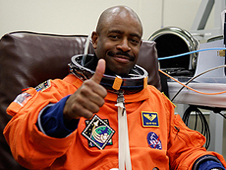 After flying on Atlantis, astronaut Leland Melvin wondered if he would ever go back to space. Credit: NASA.

Discovery also will deliver parts to the ISS, including two spare gyroscopes. The mission will include four spacewalks. On STS-122, Melvin's primary job was handling a robot arm that supported spacewalks and help move cargo from Discovery to the space station.

Wilmore, Satcher and Bresnik will be going into space for the first time.

Since entering the astronaut program in 1998, Melvin has been active in outreach. That activity accelerated on his return from space, when patches denoting STS-122 and Mach 25 marked him as a spaceflight veteran.

So, too, did a birthday celebration while he turned 44 while Atlantis was docked with the space station. Melvin was linked by voice and vision to family and friends at Langley while he flew over Australia and they were in Building 1212 in Hampton.

It was a surprise party, and during it Sam James, a former basketball partner of Melvin's at NASA Langley, teased, "We've got a basketball game tomorrow. Can you get there?"

Melvin's laughing response: "I can't play. I've gotten old. But wait, they say you get two years back when you go into space."

Now, at least one of those times is set for October of next year.