Grow Text SizeShrink Text Size
It's a Way to Cope With the Afternoon
By: Jim Hodges

The room is dim, not dark, and the aroma is unidentifiable, but pleasant. Speakers broadcast soft sets of chimes, deep like those of "Big Ben" – two, each a second apart, then separated by a longer period. Then there are more treble tones, like those of a wind chime in a soft breeze, still in two-by-two sequence.

Mark Verano moderates, speaking softly of letting thoughts wash away, of centering the mind. Twenty-five people sit in chairs along the room's walls -- eyes shut, listening but seeking not to think because thought is the enemy of meditation.

Like the rest of NASA, much of Langley is focused on the agency's quest to explore outer space. On Thursdays, in this room in Building 1216, some of those working on the quest are exploring their "inner space" for 20 minutes before returning to their tasks, refreshed.

"Meditation has been known to improve concentration and focus, which certainly can help people who use their brain," said Verano, a Williamsburg counselor who brought meditation to NASA and counsels Langley employees individually. 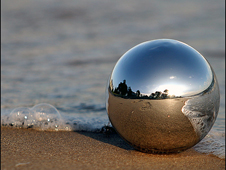 Mike Verano: "(Escape is) what brings most people to meditation. I want to get out of the rat race. I need a break from all of this stuff, this workaday world. Please promise me there's something else beyond this stuff." Credit: NASA/Sean Smith.

Click to enlarge
"It also improves spontaneous creativity. That is, when you're not worrying or troubled or have a noisy mind, it's more likely that something new and good will come out of it. That's a selling point to folks here."

It's been selling since near the end of last summer, when Verano began a class with only four people. They spread the word that there was a way for even the most agile and adept minds of a research center to cope with the bombardment of ideas.

People came looking for 20 minutes of peace before an afternoon of meetings and ideas passed back and forth in rapid-fire fashion.

"(Escape is) what brings most people to meditation," said Verano. "I want to get out of the rat race. I need a break from all of this stuff, this workaday world. Please promise me there's something else beyond this stuff."

There is – and there isn't.

Langley disciples called meditation an "off switch," though that implies a conscious effort to turn the mind off, then turn it back on. Verano prefers the word "tool."

"What we're fighting against is … thousands of years of being trained to lean toward the thinking mind; of cognitive creatures having to always be doing something," he said. "Breaking that doesn't come just because someone says 'meditation is good for you.'

"Someone whose purpose is to be, to allow things to be as they are and not just go around and do things, isn't seen as productive."

It's the reason so many are in Verano's classes.

His own reason for meditation is more personal. He had been practicing for some years before learning he had cancer of the thymus, a gland in the chest that educates cells to be immune to disease. At 49, two years ago, meditation offered a way to cope.

"It became really important to me … to meditate while on the radiation table," he said. "Or to meditate while sitting in a chemotherapy chair. To learn to be in a meditative state while waiting for the doctor to come in and tell me the result of my last test.

"My wife (meditated), too. It wasn't as if we were sitting there going 'ommmmmmm, ommmmmm.' We were aware of our breathing, trying not to let anxious thoughts overtake us, trying not to get caught up in 'what is this? What is that?' "

It wasn't surrender. It was accepting reality: Verano had cancer and it was going to be fought by radiation and chemicals.

"That's kind of the hallmark of meditation," Verano said. "It's the acceptance of what is. It's no longer resisting reality. The reality is sitting in a doctor's office, waiting results of my pathology report. That's what's happening right now. I don't need to run all of these scenarios through my mind."

To so many in an environment in which the brain is constantly challenged, so many who revel in that understanding, meditation is an unacceptable alteration of the mind. Verano challenges that.

"We're just taking you back to your natural state, which is to be at peace, quiet, to be an observer," he said. "It's just the mind gets so busy with judging and worrying and solving problems that we take that to be normal.

"Meditation teaches that altered states are depression and learning and fears and anxiety. Our natural state is bliss and to be at peace."

On Thursdays, in Building 1216 at NASA Langley, a group tries to get back to that natural state to better deal with the altered state ahead in the afternoon.