NASA Langley Research Center will play host the world’s leading Mars scientists in Williamsburg next week, marking the first time that this international workshop on the Mars atmosphere has been held in the United States.

The atmosphere of Earth’s nearest planetary neighbor holds some of the keys to unlocking the secrets of Mars’ history. Was the climate ever suitable for sustaining liquid water on the Mars surface, and possibly even life? 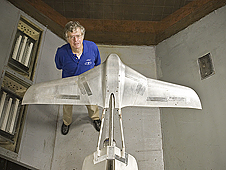 Joel Levine with the ARES Mars Airplane that was featured on "Future Flight" on CBS News. Photo credit: NASA/Sean Smith

Studying the Martian atmosphere also provides a point of comparison for learning more about Earth’s meteorology, improves knowledge for future robotic and human missions and aids Langley researchers working on the nuts and bolts of Mars missions: entry, descent and landing.

The Third Annual International Workshop on The Mars Atmosphere will be held from Monday through Thursday at The Woodlands Hotel in Williamsburg. The two previous workshops were held in Europe. More than 150 scientists, about equally divided from U.S., Canadian and European research agencies, are expected, said Joel S. Levine, workshop co-chair and senior research scientist at Langley.

Four Langley researchers will present papers at the workshop.

Alicia Dwyer Cianciolo will discuss challenges that have arisen with guided entry for the Mars Science Laboratory rover and alternative methods for atmosphere modeling.

All recent Mars landers have actually touched the surface downrange from where models said they would land. Reconstructing those entries showed a lower atmospheric density than predicted. Is there a systemic issue here? Prasun N. Desai will present a paper on the question of whether Mars models are mis-predicting the atmosphere’s density.

Walter C. Engelund will discuss the challenges and importance of modeling the Mars atmosphere for entry, descent and landing capabilities. Levine will present on the transformation of sulfur dioxide to sulfuric acid in the present-day and early atmosphere of Mars.

The workshop is only open to registered participants.