A few years ago, space-based solar power was expensive and impractical.

But now things have changed.

“The topic appeared to be dead several years ago, but it has received new life in the last year and a half,” said John C. Mankins, former head of Advanced Concepts Studies at NASA Headquarters, at a "Green Series" lecture in the Pearl Young Theatre today.

New trends of concern, a “perfect storm situation” has brought the need for energy solutions back to life.

Mankins focused on the potential pathways by which affordable and abundant space solar power may be realizable. 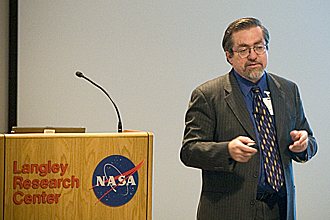 “He has long operated at the heart of many NASA space missions,” said Dennis Bushnell, chief scientist at NASA Langley, as he introduced Mankins.

According to Mankins, the Earth’s population is expected to rise to 9 billion in the next several decades. Energy security is at stake because the supply needs to match the demand. Increased carbon dioxide production is already affecting the Earth’s climate.

“There is currently no obvious single solution to assure the availability of energy we need,” Mankins said.

Nuclear, fossil and solar energy are the most talked about, according to Mankins, but he believes that space-based solar power is the best solution.

Peter Glaser, a vice president at Arthur D. Little, invented the “Solar Power Satellite” in 1968. The patent for that satellite was received in 1973.

The basic design concept of a space-based solar power system in the 1970s was inefficient, difficult to launch, had no automation and received negative feedback from the National Research Council (NRC) and the Congressional Office of Technology Assessment (OTA).

We have increased solar power generation efficiency, increased efficiency in wireless power transmission, created easier launch capabilities and have a more retractable design that does not require any astronauts or space factories, as the 1970s version did.

Mankins made the point that “you don’t need hundreds of billions of dollars to see if these new systems are economically viable.”

He admits that we are faced with a “grand challenge,” in part because there is no U.S. organization responsible for both space programs and solar energy security. That lack has allowed that concept to “fall through the cracks.”

Mankins is making it his “purpose” to inform people of the new concepts regarding space-based solar power and its possible impact on the Earth’s energy needs.