What will it take to live and work on the moon’s surface? That’s the question a NASA team demonstrated during an early June week on the lunar-like landscape near Moses Lake, Wash.

NASA scientists took some of their most promising lunar equipment concepts -- robots, rovers and more -- to perform a multitude of field tests, activities they believe will be needed to live and work on the moon. 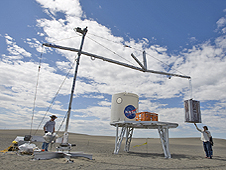 The Lunar Surface Manipulation System (LSMS) is moving a simulated lunar oxygen generation plant from a lunar lander mockup to the surface, with the help of Michael Grimes, left, and Billy Doggett. Credit: NASA/Sean Smith

Click on the image for a larger view
One test series studied how astronauts would handle and manipulate equipment on a planetary outpost. Astronauts will need a helping hand during early lunar outpost construction and as they expand their base of operations.

During the test, the Lunar Surface Manipulator System (LSMS) – essentially a robotic manipulator – proved that it can lift and precisely position equipment. The principles behind the device also apply for operations on the Martian surface.

The device looks like a lightweight crane, but it is more capable than a simple crane. The LSMS is strengthened by cables that resist pulling forces and tube members that resist pushing forces, making it strong in a smart way.

“The manipulator did everything we wanted it to, from lifting large simulated airlocks and habitats to more delicate tasks, such as precisely positioning scientific payloads” said John Dorsey, senior aerospace engineer in Langley’s Structural Mechanics & Concepts Branch and task lead for LSMS development and testing.

“The LSMS team is excited. This is why we came to NASA, to invent and create new technology. And we’re fortunate that our project will continue into next year, so we’ll be able to improve upon it and add new capabilities,” he said. 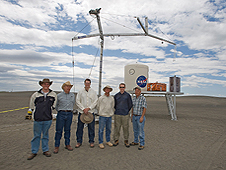 Click on the image for a larger view
Other team members are William Doggett and Thomas Jones, also aerospace engineers in SMCB; Bruce King, a designer from Lockheed Martin; David Mercer, providing data and IT support from Aerospace Computing, Inc.; and Michael Grimes, a graduate student with the National Institute of Aerospace.

Dorsey emphasized that this is a “true team effort and couldn’t have been accomplished without the skills and dedication of each team member.”

The LSMS can operate autonomously, be tele-operated from a base or, as a back-up, operated manually. It can also be reconfigured to perform different tasks.

The test article is a full-scale device and, like the concept it represents, is sized for unloading a lunar lander. For unloading a lander or getting to high places, the arm and forearm would be rotated up 45 degrees and extend as high as about 9 meters (30 ft.) above the surface. When reach is more important, it can be configured as a horizontal boom, 3.75 meters (12 ft) tall and stretch out 7.5 meters (25 ft).

The LSMS is also modular, designed to take quick-change end effectors that will allow another “limb” to be added for increased versatility and even greater reach. 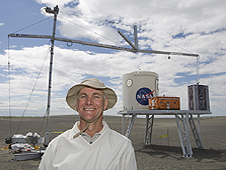 Click on the image for a larger view
For this first generation earth-based development, structural members are constructed of inexpensive and easy to machine aluminum. For work on the moon, they would be fabricated of lightweight, high-stiffness graphite-epoxy composites. Likewise, light-weight motors would be substituted for space use.

In addition to heavy-duty tasks, the LSMS is designed to handle “light” payloads -- those too large or massive to be handled by astronauts. These payloads range from 100 to 3,000 kg (220 to 6,600 lbs) and include things such as communications or power equipment, and even lunar rovers.

In designing the LSMS, researchers used analytical methods to satisfy payload mass and reach requirements and, at the same time, minimize the device’s size, mass and complexity. Studies indicate the LSMS mass is less than 2.5 percent of the maximum payload mass that it can handle in lunar gravity and it can be efficiently packed for launch. 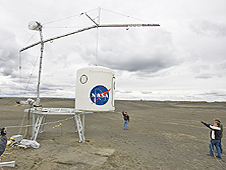 The lander airlock mockup is unloaded from the simulated lunar lander by the LSMS before being placed on the surface. Bruce King, Dave Mercer, Michael Grimes and Billy Doggett are using tag lines to keep the payload from swaying in the strong winds experienced in the otherwise lunar-like Moses Lake area. Credit: NASA/Sean Smith

Click on the image for a larger view
LSMS is being developed by NASA’s Exploration Technology Development Program (EPDP) Office at NASA Langley Research Center as part of the Human Robotics Systems Project, which has activities in Human-Robotic Interactions, Mobility and Surface Handling.