It was called "Little Joe," because it was like rolling a two on each of the dice in a craps game. Four is the point Max Faget and Paul Pursur were trying to make in their quest to prove that harnessing that many modified Sergeant engines would make a $200,000 vehicle that would perform as well and with more flexibility, and would less cost than a $2.5 million Atlas or $1 million Redstone rocket.

Faget and Purser were two NASA space pioneers, whose aim was testing some of the Mercury components that would evolve into Apollo, including the escape and parachute systems and recovery methods, plus the performance of the space capsule under pressure at altitude.

Little Joe got off to an ignominious start when it blew its top one day at Wallops Island.

"We had a little guy who used to count, 'countdown, Little Joe, T-minus how many hours so and so,' " Roger Messier remembered from his den in Poquoson. "And then he went 'T-minus' … and then there was smoke everywhere." 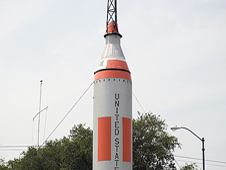 The "Little Joe" booster vehicle was built by North American Aviation, while the Mercury spacecraft sitting at the top of this booster rocket was a mockup built at NASA Langley. This test vehicle is only one of two remaining and it is located at the Air Power Park in Hampton.
Credit: NASA/Sean Smith


Click image to enlarge
"For some reason, when they got the batteries charged enough, it fired the launch escape motor," he said. That incident, about 35 minutes ahead of the scheduled launch on a Friday in August 1959, at Wallops Island, sent reporters and photographers scrambling for cover. It also sent the boilerplate capsule and launch-abort system skyward about 2,000 feet into the Atlantic off Chincoteague.

It was an ignominious end to NASA's first space mission and did little to foretell the success that was to be just six weeks later.

Messier, who was charged with pyrotechnics in the Little Joe program, redesigned the battery charging system and worked on the pyrotechnic system for launching the rocket after the first fizzle.

"I was responsible for designing the ignition sequence system," Messier said. That meant he had to work out the proper order for each of the engines to ignite, including the four Recruit motors that were added to the Sergeants. The package produced 235,000 pounds of thrust.

Without computers or solid-state electronics, the ignition sequence depended on mechanical timers, their firing order and the split-second gaps between ignitions worked out on a slide rule.

Neither Johnson Space Center, nor Kennedy Space Center existed. "Wallops was efficiently operated and frugal," Messier said. "And everything was controlled by Langley. It was all right here in Virginia. Max Faget, Bob Gilruth, Caldwell Johnson – everybody contributed one way or another."

On Oct. 4, 1959, everything worked in sequence and the 55-feet-tall, 20-ton rocket reached an altitude of almost 40 miles before being blown up about 2 ½ minutes after launch. Impact was 70 miles from Wallops.

It was all so new that, no matter how many heads were put together over how many plans with how many slide rules, every launch was a revelation.

"It was almost beyond our comprehension what we were getting into," Messier said, both of Little Joe and of this concept of space travel. 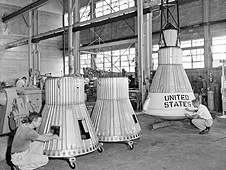 
Click image to enlarge
"Where would it go? How far would it go? It was just like a new frontier. Space was a new frontier, and it was on-the-job training to learn how to do it. You had nowhere else to look. This was real-time, cutting-edge technology and the whole nation was watching. If you failed, the whole world knew it."

There were failures. Each launch had a story. Shortly after the first success came the first passenger, Sam, a rhesus monkey named for the Air Force School of Aviation Medicine. Sam flew on Dec. 4, 1959.

"How does a human react in a zero-G environment?" Messier said. "We didn't know. We had no experience at all.

The experiment added animation to Little Joe and fostered curiosity from the media and the public at large. Who would be the first human in space? What about this concept of "astronaut?"

"We started getting doctors and engineers together. They built the medical directorate simply to monitor man in space flight. Monitoring capabilities you have now were started by the space program because they had to monitor humans in flight.

"Ambulances being able to monitor people now and connect with hospitals started with Little Joe and really made a big jump with Apollo."

"Because Apollo was bigger (13 feet in diameter vs. the 6-feet-in-diameter Little Joe I), the rocket wasn't stable," said Milt Silvera, who started at Langley in 1951 and made the migration to Houston in 1962 with hundreds of others, including Messier. He became program manager for Little Joe II in 1964 while at Houston.

"During Korea, I had gone to flight school in San Marcos, Texas, and I liked it," Silvera said. "And I wanted to work in the space program."

Little Joe II also had problems at first. Messier worked with its pyrotechnics.

"We had a design review," he said. "Max Faget and Walt Williams and Caldwell Johnson were there. They asked me to stay and redesign the whole pyrotechnics system. I went out there for three days and stayed two months."

In the end, money ran out on Little Joe. It was time to focus on Apollo. NASA's space program, already in high gear, sped up.

"When (President Kennedy) said we will go to the moon by the end of the decade, we hadn't even flown Gemini yet," Messier said. "I heard the speech on the radio because we were working. It was a challenge. Boy, that's a whole new concept: go to the moon. We had to develop landing capabilities and we were still learning how to fly."

In the end, flying was learned as was landing. The people who taught those skills were a remarkable bunch.

"I look back at that, and the people who were on that program and the people who steered that program, it was like an act of God that they got together," Messier said. "The brainpower that was there, and the innovative capability that they had were just amazing. They didn't start with Apollo. They started with Mercury and Little Joe, with Bob Gilruth and Max Faget and those people. With George Low. With guys like Milt Silvera.

On the road to Apollo.