Arlene and Joel Levine looked around NASA and easily determined what was missing.

"We would look at a launch of the space shuttle or launch of a mission to Mars, and all we would see were white faces in the audience," said Joel Levine, of NASA Langley's Science Directorate. "I've been fortunate to be at a number of Mars launches, and it's very uncommon to see a non-white face at the launch facility."

Their work in trying to change that through education will be honored when the Levines receive the National Alliance of Black School Educators President's Award on November 20 at the NABSE conference at Fort Worth, Texas.

Former astronaut Bernard Harris, a medical doctor who was the first African-American astronaut to walk in space, will present the award. 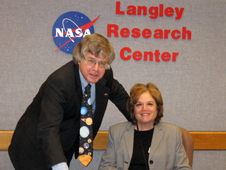 Joel and Arlene Levine, on the set of their lecture series aimed at students from underrepresented minority groups. Credit: NASA
The Levines' quest began with a plan Arlene Levine put together with the NABSE six years ago.

"In 2004, Arlene and I and NABSE submitted the proposal to NASA headquarters' Planetary Exploration Division, and what we said was that we wanted to develop a program of interactive lectures that would target African-American students across the country," Joel Levine said. "NABSE would begin to identify the schools."

From that, a year later, came a program that originated at Langley in which Arlene Levine, Strategic Relationships Office, prepared a curriculum and supporting materials and Joel did the lectures on camera.

Those lectures are about the planets, treating Earth as one of them.

During the past school year, for example, lectures were entitled "Exploring Other Planets: Visiting Other Worlds," "The Earth System," "Earth and Mars: A Tale of Two Planets" and "Global Warming: Causes and Consequences."

In the early years, the programs were delivered through video conferencing, which required special equipment that some schools did not have. Some school systems downloaded the lectures and replayed them at the schools, and one state even put them on a Public Broadcasting channel.

"That first year, Crittenden Middle School in Newport News sent students to the studio to hear the lectures in person," Arlene said. "One month, the students were told they couldn't come to the lecture because they had a half-day of school on the day that the lecture was being presented, which meant they would be dismissed before the lecture would be complete.

"The students were angry and asked the school if their parents couldn't come and pick them up so they wouldn't miss the lecture."

The school arranged for a bus to pick up the students after the school was dismissed.

Two years ago the lectures were moved to the NASA Digital Network, which offers wider dissemination.

"By working with NABSE, we make sure that schools that include underrepresented minorities are targeted, but these lectures are open to school systems everywhere, regardless of the racial population of the schools," Arlene Levine said. "NABSE includes Hispanic populations as well as African-American populations.

"There is enthusiasm, and we have to capture that enthusiasm."

That enthusiasm is reflected in feedback, Joel Levine said. "The programs include a website for questions, and sometimes I'll stay for hours after we go off the air, answering those questions."

They are aware of limitations.

The motivation is a simple one and not all that altruistic.

They are trying to change that, with the help of the NABSE. And now, with an award from NABSE.