Grow Text SizeShrink Text Size
LARSS: Doing Real Research Opens His Eyes to Opportunity
Summer interns come to NASA's Langley Research Center for various reasons. Some want a good summer job. Some want a resume boost. Others want to take a look at what could be their own future. Most leave surprised at what they are given a chance to do. Over this week, the Researcher News is presenting a few of their stories.

Don’t get your hopes up.

Those words crossed my mind almost every day. I had recently applied for a summer internship program at NASA’s Langley Research Center, Langley Aerospace Research Summer Scholars (LARSS), but I had convinced myself that there was no way I would ever get accepted.

I was a good student, nothing spectacular, attending a little known private school, Milwaukee School of Engineering. There had to be thousands of other applicants that were more qualified; I had no chance. So I went to bed every night, reluctantly content that my dream to work for NASA would never be fulfilled.

Then, it happened. I remember exactly where I was when I was first contacted. I was sitting on the couch, eating lunch, casually checking my email. Something popped up in my inbox. 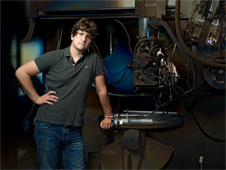 Click image to enlarge
I must have read the email five times before it sank in.

It was Bill Seufzer (now my mentor), a researcher at Langley. He asked if I had been contacted about LARSS. I quickly replied that I hadn’t, trying not to burst at the seams with excitement. I took a breath and told myself that this didn’t mean I got accepted, he just wanted to talk.

A few emails later and he asked me to call him. All of my previous interview experiences couldn’t calm my nerves for this phone call. I mean, this guy works for NASA, and he wants to talk to me? I couldn’t wrap my mind around that concept.

I called, and we talked as I paced nervously up and down the hall. It’s all a blur after that. We emailed back and forth, and he told me that he picked me to be his intern this summer. The next thing I know I’m on the road to Virginia.

I finally arrived, moved in with three other LARSS interns, and two days later it was time for my first day of work. I felt important as I was allowed through the gates after having my ID checked. I drove through the maze of roads, found the building, signed in and took my seat for orientation.

I was expecting at any minute to wake up from this dream. I didn’t.

It didn’t take long for me to realize that this internship was the prized jewel of internships. I was going to be doing real research, not pencil pushing like a few of my friends were doing at their summer internships. Not only that, but the cutting edge technology my mentor works with is impressive, to say the least. He works with the Electron Beam Freeform Fabrication (EBF3) team. There is a giant vacuum chamber that houses the EBF3 system as it moves around making parts. The process works by melting metal wire with an electron beam. As the robot moves around in the chamber, parts are made. He wanted me to investigate the robot’s dynamics, how it moves around inside of the chamber while making a part. After a little direction and some equipment, I was ready to go. I worked in the lab almost every day with the EBF3 technician, Richard Martin. I ran test after test, measuring the robot’s movements with a linear variable differential transformer (LVDT). It gave me position and time data. I changed parameters and ran more tests, asking Bill for help whenever I needed it. It didn’t take me long to figure out that the robots’ movements were not very smooth. I dived into the system’s programming manual, searching for an alternative way to program the movements. Once I found it, I rushed to test my new code. It worked. After seven weeks, I finally felt accomplished. I took a step back and let everything hit me all at once. I did this. I contributed to something at NASA. I realized how much my mindset had changed from the first day I got here. The maze of roads was now a familiar drive. The concept of working for NASA was no longer farfetched, as I had believed my whole life. I realized how normal it seemed for me to be here. Once a dream, now a reality, my internship experience at NASA has opened up my eyes. I can fulfill my dreams. I can do anything I want to do.