Grow Text SizeShrink Text Size
These Are Cats That Can Be Herded
By: Jim Hodges

Ken Thompson was looking for a metaphor to carry a message laced with wit to an assembly Friday in the Reid Conference Center.

"In the U.K., we say it's like herding cats. Is that an expression over here?" asked Thompson, his Belfast, Northern Ireland, lilt bridging the gap between two nations.

He was assured that there was. Only later did he learn that the sayings mean different things in different cultures. Here, herding cats is impossible. Thompson spent an hour Friday letting people know that it can be done. 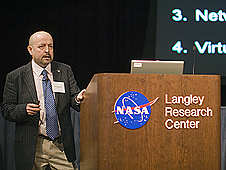 Ken Thompson defined, then outlined the uses of Networked Enterprise to a group that is seeking to create a model for the way NASA will do business in the future. Credit: NASA/Sean Smith

Click image to enlarge
Herding cats, "that's a bio-team," Thompson said near the end of a day-and-a-half-long conference aimed at the Virtual Center of the Future.

"A bio-team is a team that has a life of its own," he added.

It's an organization that has the agility to handle the unexpected; the "requisite variety" of just enough capability but not too much; that is networked and capable of communicating both internally and externally and is virtual.

From the bio-team, Thompson outlined what he called "a maturity model" for the Networked Enterprise.

"Was it Einstein who said that all models are wrong, but some of them are useful?" Thompson said.

Thompson's enterprise is built on a foundation of people "some of whom you never meet … with different professional cultures," he said. "It's a real change."

The danger is "free-riding," or people who are included in the foundation but who do not contribute to the organization. You can't count on them.

Another characteristic of the network of the future is that "it will be messy," Thompson said. "It's like life, actually. Life is untidy, and untidiness is an indication that you're alive. An organization these days that's tidy is probably either dead or dying."

Boundaries of successful networks are semi-porous membranes, not walls, he added. "The boundary of any commercial organization is very important."

From that foundation comes the introduction of technology.

The difficulty is separating technological wheat from chaff. Thompson highly recommends the use of social software, including blogging, networking, wikis and their ilk.

"NASA is a wonderful brand," he said. "In fact, you are so much more than a brand. You're what they call in the U.K. a 'social object.' People will congregate and group around NASA.

"You've got something here that most organizations don't have. In Northern Ireland, our claim to fame is that we built the Titanic. The Titanic is a social object as well, but it's not the social object you have here."

With the personnel and technological foundation, the organization is built with virtual working practices and systematic thinking.

For all of the foundation, "in the U.K., we say a fool with a tool is still a fool," Thompson said. "We need to become less linear thinkers and more systems thinkers."

By that, Thompson meant that contributions to the network need to brought with a sense of how they add to the system, rather than merely an individual's portion of it.

"If you don't change your working practices, then you won't get much" from the other stages, he said.

Even with all of the accent on technology today, the challenge of a successful network is "about people dealing with people," he said. "You have to manage relationships just as you manage everything else."

Thompson's Friday keynote speech in many ways summarized a day and a half of building toward a future in which work in NASA centers is done in virtual systems. It will include laboratories "not just on the ground, but in a space capsule and perhaps one day a lab on the moon," said Sharon Welch, who worked with the discussion that included speakers from the military, from academia and industry.

From the sessions came some first steps toward building a system to accomplish NASA's mission in the future.

And, said Welch, "this is not where the conversation ends, but where it begins."