Al Ragsdale was coaching Joe May through landing the Apollo 11 simulator Tuesday when it touched down safely.

"Want to do it again?" Ragsdale asked May, a Republican delegate from Virginia's 33rd District, representing part of Loudon and all of Clarke County.

"I think I'll declare victory and quit the field," quipped May, a Civil War history buff who visited NASA Langley as part of his job as chairman of the state's Joint Commission on Technology and Science.

May is one of many politicians who have been to the center, but his questions weren't those of a lawmaker so much as those of an engineer. He has a degree in electrical engineering from Virginia Tech and founded Electronic Instruments and Technology, a firm near Dulles Airport, not far from his district.

"This is special for me," May said. "These are the questions I always wanted to ask but didn't have the people with the answers. It's like I'm at work, but it's really a busman's holiday for me." 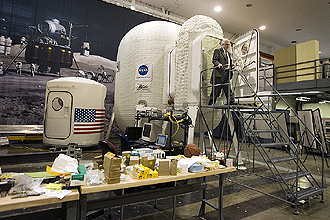 Interspersing his questions with wit – "hypersonic and cruise doesn't even sound like parts of the same vocabulary," he told Ken Rock at the 8-foot High Temperature Tunnel -- May also got an aeronautics briefing from Guy Kemmerly, listened to Karen Whitley talk about a lunar habitat, heard Karen Taminger speak on advanced materials and got a lesson from Mike Difulvio at the 31-inch Mach 10 Tunnel.

When Whitley spoke of tiny particles in space, May remarked, "We were just talking about that yesterday."

Later he said that the conversation involved a member of his committee and that he answered the member to the limit of his knowledge at the time. "Now I know the answer," May said after talking with Whitley.

But May was most animated at the flight simulator. As a licensed pilot, his queries of Ragsdale were on point.

When Ragsdale demonstrated the simulator with May in the jump seat, the propellant gauge was at 16 and falling. Ragsdale landed it at 10.

"I think Neil Armstrong was at 5, wasn't he?" May said of the astronaut's moon mission.

"It was 3 percent," said Ragsdale. "I was in Mission Control that day."

"Wow, you guys must have been sweating bullets," May said.

NASA Langley is an advisor to the Joint Commission on Technology and Science, which sets policy for the state in that area. The committee is hosting officials from the center on January 29-30 in Richmond.

But Tuesday was May's day.

"I've been here before, but it was just for a cursory look," he said. "This is great."

And, after "quitting the field" in the Apollo simulator, he added: "Let the record show that the gentleman from Loudon landed successfully."