Grow Text SizeShrink Text Size
An Intern's Story: A Time to Test Flying Robots
Summer interns come to NASA's Langley Research Center for various reasons. Some want a good summer job. Some want a resume boost. Others want to take a look at what could be their own future. Most leave surprised at what they are given a chance to do. Over the next two weeks, the Researcher News is presenting a few of their stories.

Summarizing 10 weeks is difficult in any circumstances, but when those weeks are spent as an intern in the Langley Aerospace Research Summer Scholars program, working at a NASA center with a ton of awesome people, it's even more difficult.

I worked with a systems engineering team to develop and integrate the software and hardware needed for comparable indoor and outdoor tests of autonomous, unmanned multi-vehicle flight control.

In plain English, that means we were developing ways of testing flying robots both inside and outside. 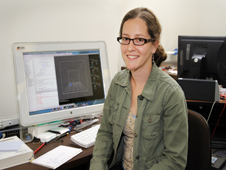 Click to enlarge
Upon arriving at NASA Langley, Jacqueline Kory learned that a key to her summer internship was become more versatile. Credit: NASA/Lindsay Dias.
Ten interns, including me, were in the lab on workdays. That was not counting our mentor, Garry D. Qualls, or the slew of friends and colleagues who drop by on a frequent -- if irregular -- basis. Most are engineers of some variety; the others are pursuing degrees with the word "computer" in the title.

Me, I'm a cognitive scientist.

I hail from Northern California and attend Vassar College in Poughkeepsie, N.Y.

Although my academic focus has been on embodied agents and robotics applications of cognitive science, I've studied with Vassar's multidisciplinary stew of psychologists, biologists, philosophers, anthropologists, and computer scientists.

During my first week at Langley, it quickly became clear to me that my coursework had not prepared me to do all the things my lab's engineers could do. I had not studied mechanics, controls or circuits. I was not a whiz at soldering, nor did I understand the intricacies of aeronautics.

What I could do, however, was be versatile.

I programmed microcontrollers in C and C++, then switched to Java to write code to parse and display real-time data. I evaluated possible ground control station software options, dug through an open source flight simulator and covered the lab's white boards with organizational diagrams. When it was time to develop communication links between more than six different programs, I eagerly helped decipher network protocols and data packets.

I even chased our miniature Parking Lot Exploration Rover across the pavement in 105-degree weather while testing a navigation algorithm.

Most of my time at Langley, no matter what the activity, was spent learning. My lab mates have remarkable skill-sets, and we're all willing to share our expertise.

Our electrical engineers taught me not to fear wires and breadboards. I began to understand the theory behind PID (proportional-integral-derivative) controls with the help of our aerospace engineers, drawing on distant memories of calculus and knowledge of behavior-based robotics algorithms.

In return, I helped lab mates sort through debugging messages and null pointer exceptions, while occasionally spouting interesting facts about brains. I spent some quality time with software. I'm graduating from Vassar in the spring with a minor in computer science in addition to my cognitive science major. This summer's work has solidly demonstrated that knowing the syntax isn't the same as using it in meaningful ways.

But working in Garry Qualls' lab is not just about acquiring technical skills and applying knowledge learned in classrooms.

With so many interns tackling parts of the same project, communication is crucial. We've all had to learn to deal with each other. Our respective idiosyncrasies and backgrounds sometimes make that difficult. More than once, I found that a lab mate was simply looking at a problem from a different point of view than I was—a view that, prior to our disagreement, I hadn't thought to question.

I enjoyed having the opportunity to re-examine my perspective and those previously unrecognized assumptions.

This summer has been fantastic. I got to see my lab transition from conducting chaos to smoothly functioning as a team as we worked together to establish an autonomous vehicle testing facility.

My experience as a LARSS intern has been inspiring. I'm not entirely sure where I'm headed next—graduate school, that enigmatic first job after college, writing the next great sci-fi novel—but it'll have to be fantastic to beat this summer.