Each June, NASA's Langley Research Center welcomes hundreds of student interns. This summer, about 300 students from all over the U.S. who are studying majors that lend support to NASA's mission, will spend the next 10 weeks working at the center. For the fourth year, the Researcher News is presenting a few of their stories.

My love for aviation began at an early age.

As a child, I spent many Saturday mornings flying from Elko, Nev. to Jackpot, Nev. to have breakfast with my father and grandfather. It was that, and my love affair with the movie Top Gun, which I watched so often that I wore out my VHS copy, which fueled my desire to work in aeronautics. 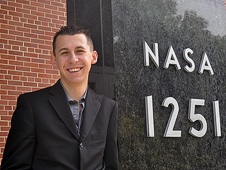 The combination of those memories made my choice to become an aerospace engineer an easy one. The difficult part was finding a school nearby that offered an aerospace degree.

I chose to attend Wichita State University (WSU), which has turned out to be one of the best decisions I have made.

At Wichita State, students are required to take at least one experimental methods class, during which we use both a low speed wind tunnel and a Mach 2 supersonic tunnel. These lessons offered at Wichita State have prepared me for my experiences at NASA.

I first heard about NASA internships from my friend, James Winkel, who has recently been hired as a civil servant at NASA's Glenn Research Center. He encouraged me to apply for both the co-op and Undergraduate Student Research Program (USRP) internship programs.

After my first round of applications, I did not receive an offer from any of the places I applied to. A little disheartened, I applied again for the next year and received an USRP internship at NASA Glenn for the spring.

While there, I met many managers and leaders within NASA because my mentor, Ray Castner, took me to many different meetings. It was even joked in one of the meetings that Ray was grooming me for project management.

At Glenn, I worked on the Supersonics project, helping to determine particular exhaust plume effects on the sonic boom signature of a supersonic transport. While at the center, I also heard about the NASA Aeronautics Academy and decided to apply.

I had completely forgotten that I applied for the Academy, until the night that I received an email from Liz Ward at NASA's Langley Research Center, saying I had 72 hours to accept her offer to join the Academy. It took me 30 seconds to respond.

I was no longer worried about what I was going to do for the upcoming summer, but instead my new concern became planning my drive from Ohio, back to Kansas, then back to Virginia. Well, that, and what exactly I was expected to do at Langley for the summer.

My worries disappeared once I arrived at NASA Langley, and I realized that I was home. Between the green landscape and the thirst for knowledge that everyone has here, I knew this was where I wanted to work.

The work that I did as part the NASA Langley Aeronautics Academy was challenging from a leadership perspective, but rewarding technically. Our work consisted of conceptually designing an aircraft to meet NASA's Environmentally Responsible Aviation (ERA) goals, which we successfully completed.

I laid the groundwork for my summer project, working in the configuration aerodynamics branch, where I am back to studying supersonic aircrafts and their boom signatures.

After this summer, I will begin my final year as an undergraduate. When that is complete, I plan on attending graduate school to further study computational fluid dynamics.

To me, NASA is the place where you are free to innovate and pursue your ideas. Here, you can walk down the hall and talk with a person that has been here for 30 years and as soon as you step into that office, you are a peer of theirs. This I feel is something that is uniquely NASA, which has helped make my time at NASA some of the most enjoyable work experience I have ever had.