Joe Zawodny was looking for some help in trudging through research on low-energy nuclear reactions as a potential green energy.

"I don't have to know things in detail, but I need to know enough to talk about them," said Zawodny, whose educational background is nuclear physics, but whose career at NASA has taken him far from those days at Notre Dame.

"With a phone call or a look through an index, I can do a brain check and find someone here who knows what I need to know," said Zawodny of his fellow employees at NASA Langley. "We've got a broad workforce that individually is very deep. You can wire up a team in a couple of weeks that can go as deep as you can go and beyond."

That "brain check" has a new vehicle to help with that in the Langley Innovation Opportunities pilot project Web site: https://nasa.imaginatik.com 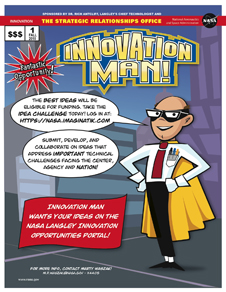 "It's a web-based tool so that people can go in and submit ideas. It allows other people to comment on those ideas and also to rate those ideas. And it helps promote collaboration, helps to get people thinking about those ideas. 'Do we need somebody on the space side, on the aero side, and now who can we get to work with us on this?' "

The site grew out of a meeting held to foster ideas and promote innovation. In that meeting, five groups wrote suggestions on walls in the Navigation Center, and almost universal among those suggestions was an "idea repository."

In it, all kinds of ideas could be proposed for changes at NASA Langley, from improving operations to developing new space technology innovations. From this nascent level, ideas could grow and mature with input from others who are perhaps conversant with the technology concept or those who would merely like to work on it with the originator.

"One of the keys is to form networks," Antol said of the goals of the website. "A key to innovation is access to collective intelligence of the community."

The principle has been demonstrated worldwide in questions submitted for "crowd-sourcing." The idea is that you never know who has an answer.

This website is open to the Langley community of civil servants and contractors who work behind the center firewall. Commentary is expected to be spurred along by center technical challenge leaders.

The website is envisioned as a first step toward ideas maturing into adoption with support from the Center Innovation Fund, which is anticipated as funding center-wide innovations at between $2,000-10,000 and space technology innovations at up to $250,000.

"My role is going to be to help define the criteria of what we'll review and start to set up the review leads," Antol said.

Issues remain, as is the case in most pilot projects. One is the concept of idea "ownership," another a sensitivity to potentially classified innovations. For that reason, Antol and others involved in the website – notably Marty Waszak and Beth Plentovich of the Strategic Relationships Office – are encouraging early stage ideas, "Technology Readiness Levels of one or two," Antol said.

The project will run until the end of November, after which the results of the pilot will be reviewed, the tools will be refined and the process will become a more permanent part of how Langley does business.

For now, though, "the real key is participation," Antol said. "If you don’t have people engaged in using this tool, then it's going to be difficult. We invite people to go in and look at it and not only comment on the ideas, but how they feel the system works."