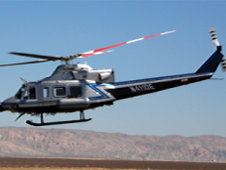 During the 1980s, researchers at NASA's Langley Research Center worked with the Army to improve helicopter design to solve the LTE issue.
By: Sheri Beam

One of the issues for a helicopter is loss of tail rotor effectiveness (LTE). If not controlled by the pilot, LTE can cause the helicopter to crash.

During the 1980s, researchers at NASA's Langley Research Center worked with the Army to improve helicopter design to solve the LTE issue.

Henry Kelley, now retired from Langley, was a member of that research team.

"From our (wind tunnel) measurements, we learned that the fuselage by itself was contributing to the directional control requirements for the helicopter," Kelley said.

The team discovered that the main rotor downwash was accelerating around the tailboom, creating unwanted air pressures and problems in controlling the helicopter.

After wind tunnel and computational testing, they developed a technology solution for the problem: tail strakes. A strake is a protruding element mounted to the exterior of an aircraft to improve aerodynamic stability.

Kelley said that the team believed it could, in effect, spoil the unwanted air flow around the tailboom by installing strakes on it. Eventually, the team decided to use two strakes, an upper and a lower, mounted on the tail boom. The data showed that the placement of two strakes improved the stability of the helicopter, which also meant better performance.

But, the Langley research was never applied to commercial helicopters until 1998, when Robert Desroche, owner of BLR Aerospace Inc. of Everett, Wash., an aerodynamicist and a pilot, read a paper about the Langley helicopter research.

"He saw that from Langley estimates on the percentage of pedal margin improvement from managing the airflow with the strake technology, you could create anti-torque without investing additional energy," says Dave Marone, Vice President, Sales & Marketing, BLR Aerospace.

That is particularly important to helicopter owners and pilots who have to carry heavy loads and stay in extended hovering maneuvers.

BLR obtained an exclusive license for the Langley technology. With the license, the firm began working with helicopters. By using the results of the studies, BLR also began to develop products. Although the strake technology is not novel‹it has been used on boats for centuries‹BLR optimized the design and figured out just where to place the strakes on the helicopter's tailboom. Eventually, the company patented a dual-strake technology, which has received FAA certification. 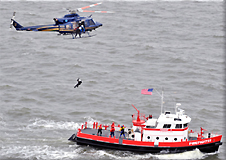 With the BLR strake system, helicopters used by Emergency Medical Services, firefighters, humanitarian organizations, off-shore oil industry, the military and others are able to carry 100% of their loads versus 80-90% without the system.

The dual strakes are easily applied to the tailboom of a helicopter. As the Langley researchers determined, a helicopter outfitted with the technology has better performance and is more efficient.

"It reclaims energy from the main rotor, gaining about 10% of anti-torque by using the tailboom creatively," Marone said. "With two strakes, one spoils the airflow on the left but it continues on the right. This creates an additional 91% in useful load for the Bell 412EP medium helicopter."

With the BLR strake system, helicopters used by Emergency Medical Services, firefighters, humanitarian organizations, off-shore oil industry, the military and others are able to carry 100% of their loads versus 80-90% without the system.

Marone believes that by working with NASA to integrate the strake technology into their products, BLR is able to affect a change on various Bell helicopters.

"The dual tailboom strake system has been incorporated into BLR’s FastFinâ system and both work well together," he said. "The NASA technology provides an added level of stability, because the lower of two strakes ejects the turbulent breakdown and moves it away from tailboom and reduces the pressure differences."

BLR is working with Bell on installing the technology on other models. Henry Kelley continues to work as a consultant for BLR.