Grow Text SizeShrink Text Size
Ceremony Breaks Ground on a Vision
In 1983, the first ton of cyrogenic nitrogen flowed through the closed circuit of the National Transonic Facility (NTF). The cryogenic nitrogen consumed enables the gathering of test data for aircraft. The unique test capability of the NTF is unrivaled anywhere else in the world. 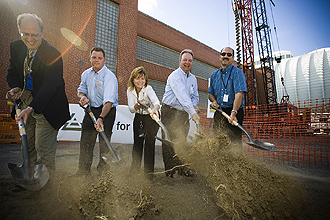 Center Director Lesa Roe explained, “Due to the escalating price of liquid nitrogen, we weren’t making the most of the NTF that we could.”

She recognized several key members from NASA, ROME and Air Products for working together to make their visions a reality.

Construction started with the groundbreaking ceremony for the new $16.8 million Liquid Nitrogen Plant that took place at the NTF on Oct. 4.

The new plant, designed and supplied by Air Products, is scheduled for a 2008 start-up. Air Products won the competitive procurement for a turn-key, fixed price contract, based on a "best value to the government" evaluation completed in September 2006.

Air Products has had a working relationship with NASA for 50 years. In fact, Air Products has supplied all the liquid hydrogen used for every Space Shuttle launch and prior Mercury and Apollo missions. 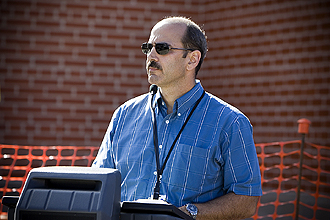 The new plant will also strengthen NTF’s ability to meet the goals of the National Aeronautics Research and Development Policy.

George Finelli, director of the Center Operations Directorate explained that the NTF would be the first facility on Center to undergo construction since 1998.

The new plant is a combination of thermodynamic and process equipment that has been uniquely designed and tuned by Air Products to separate nitrogen molecules from the atmosphere and deliver them to the NTF storage tanks as a high purity cryogenic liquid.

Tom Mulcher, General Manager of Integrated Businesses at Air Products explained that the design is 90% complete and that the whole effort is on schedule. “And now it’s time to start construction,” he said.

"This liquid nitrogen plant groundbreaking represents a significant milestone for everyone. We are expecting a successful project completion, and we are targeting to do so ahead of the required contract completion date. The combined efforts of our dedicated project teams at both Air Products and NASA will make this a safe and successful project," said Steve Meholic, business manager, Air Separation Equipment at Air Products.

“It is one thing to get the vision. It’s very often hard to deliver on that vision,” said Brant Adams, General Manager of the ROME Group.

But the vision is being delivered and quickly. Within one year, the ribbon cutting ceremony is expected to take place at the NTF.