The tall Australian, wearing three sensors on her forehead under her white visor, takes a short practice swing with her putter, while a laser beam plays back and forth across it. Perhaps six feet down a green carpet, much like that of a miniature golf course, the "green" undulates and two feet beyond that, the hole shrinks from its 4 ½ inches in diameter to barely big enough to accommodate the golf ball.

The sensors note tension in the muscles of her face. A soft voice on a recorder advises "relax … breathe … good." 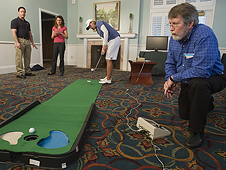 Click image to enlarge
A breath and a pause, and the tension is released. The laser stops to become a target line on the green. The hole opens up and the green ceases undulating. Katherine Hull putts. The breath and the pause are among the reasons that the ball goes into the hole.

They are part of a pre-shot routine for the 10th-ranked woman golfer in the world, who at the time is two days from teeing off in Williamsburg's Michelob Ultra Open, an LPGA Tour event at Kingsmill. They are triggers to mental relaxation and concentration.

Mike Bibbo is videotaping the process for NASA 360, and the show's co-host, Jennifer Pulley, is talking with NASA Langley engineer/psychologist Lance Prinzel about the Zeroing Out Negative Effects (ZONE) biofeedback training aid that he and Langley colleague Alan Pope have invented.

The process began with pilots and air traffic controllers. Prinzel and Pope sought to train them to relax as a way to heighten concentration and reduce the effects of fatigue. The research was part of a larger effort to develop a program called CRM2, for Crew Cognitive Resource Management. It sought to examine the internal and external reasons for human error.

"There was clear evidence in the research that there were optimal states in tension and cognitive awareness," Prinzel said.

Those states for athletes are "being in the zone." For air traffic controllers, it's "having the flick." For pilots, it's "being ahead of the aircraft."

The problem is inducing those states. 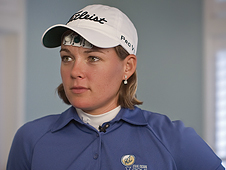 Click image to enlarge
That assessment came from pilots who were brought in, showed several relaxation training aids and pronounced them inadequate.

That sent Prinzel and Pope off in another direction. What do pilots and controllers enjoy in their off hours?

The term "recreation-embedded" comes into play here. "Let's make the training a way that they don't even know they're training," Prinzel said.

He and Pope had had some earlier success by introducing video games into part of the therapy for children with Attention Deficit Disorder. This was in the same ballpark.

ZONE is a biofeedback device that is a spinoff of their efforts with pilots, linking the training with work done by sports psychologists.

"They have somebody away from the situation, maybe just a few feet away, practicing concentration, practicing relaxing," Pope said. "Then they have them step up to the situation and try to hold that state.

The marriage of those two attributes translates well from golf to flying an airplane or controlling those who do.

"What we want to do is to train pilots to have those kinds of skills: concentration and stress-free skills," Pope said. "We don't want to have to add this to their training, because they feel like they have enough training. They want to enjoy themselves."

So, if ZONE can help pilots and air traffic controllers, why not golfers?

While casting about for uses to put on its patent application, Pope and Prinzel found research that indicated that this could be of value to them as a way to train the mind to help make putts on Sunday afternoons. And, after all, NASA licenses patents all the time and people spend more than $25 billion on the game every year.

Said Prinzel: "We're not advocating that NASA gets in the golf game …"

But, responded Pope, "one of the objectives to spinoffs is commercialization. That's finding an interested party who wants to license the patent and market a device like this, and those funds come back to NASA."

Hull, who recently won the Australian Masters tournament, continues to stroke putts, making some, missing others, periodically stopping to ask questions of the inventors. The value of ZONE is apparent to her.

"I think it's where the next improvement in golf is going to come," she said of biofeedback. "Everybody thinks it's the equipment, and Tiger (Woods) has shown up what fitness can do.

To Pope and Prinzel, ZONE brings together the best of several worlds.

"It's a quality of life issue," said Prinzel. "It advances science. And it really is a good example of how researchers can take one thing, look at it from a different angle and apply it in a different way."