Grow Text SizeShrink Text Size
Education, with Some Help From a 'Flat' Friend
By: Brittany Green, University of Utah

Earlier this year, Caryn Long, who manages the Digital Learning Network at NASA Langley, received a "Flat Paxton" doll in her mailbox.

The doll is part of the “Flat Stanley” Project, which was based on the 1964 children’s story, “Flat Stanley,” written by Jeff Brown.

In the story, an accident leaves a young boy named Stanley flattened to one-half an inch thick but otherwise unharmed. Stanley uses his unique condition to slide under doors, squeeze into narrow spaces to retrieve lost items, even to catch art thieves. 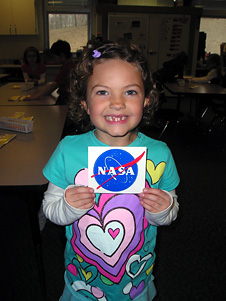 Paxton Brown is the "Flat Paxton" first grader who decided to "mail herself" to NASA Langley from her home in Rockford, Mich., to find out a few things about NASA. Credit: NASA

Click image to enlarge
Stanley is invited to visit his friends across the country, but plane tickets are too expensive. He comes up with a cheap, comfortable alternative. Stanley decides to fold himself into a large envelope and airmail himself across the country. His cross country adventure has been used as an educational tool through the “Flat Stanley” Project, and NASA Langley hosted a student’s “Flat” doll earlier this year.

"Flat Paxton" made stops at several planets as she was guided through a virtual tour of our solar system. She also got to help out behind the scenes by acting as a camera operator during a recording session.

“As a stranger, I know that I have had a chance to inspire Paxton and her friends on the possibilities that NASA holds for them," she said. "It was a joy to do this task for these students.”

In 1994, Dale Hubert, a third-grade Canadian teacher, used the idea of “Flat Stanley” as a hands-on method of education. He has students create their own “Flat Stanley” dolls, sometimes modified to create unique “Flat” dolls that look like each child. Students then mail their flat counterparts to different parts of the country or world along with a journal that documents the “Flat” child’s adventure.

Teachers in thousands of classrooms have adopted the project as a means to teach children about different cultures and professions. A version of the doll has flown in the International Space Station; ridden on board US Airways Flight 1549, which safely crash landed in the Hudson River earlier this year; and visited international political leaders and well-known cultural figures such as President Barack Obama and Canadian Prime Minister Paul Martin.

Flat Paxton arrived at Langley from a trip to North Carolina and, after her visit here, was shipped to the Jet Propulsion Laboratory in California to learn about the NASA Explorer Schools program. Paxton and her classmates at Crestwood Elementary received posters, stickers and lithographs in addition to a journal and photos that documented her visit to Langley.