Grow Text SizeShrink Text Size
Technical Writing Guru Katzoff Dies at 101
Sam Katzoff, who spent more than three decades at NASA Langley, and whose book "Clarity in Technical Writing" is still regarded as gospel by those at the center who write reports, died Saturday at a retirement community in Pikesville, Md. He was 101. No funeral was held. Katzoff donated his body to science. More than a year ago, as Katzoff was about to turn 100, Jim Hodges ventured to his home, then wrote this story that The Researcher News is running in "Dr. Sam's" honor. By: Jim Hodges

PIKESVILLE, Md. -- Sam Katzoff is celebrating his 100th birthday Monday in a cozy three-bedroom apartment, with his oxygen machine, his books, his art and memories. . .

. . .of 1936, when he was a newly-minted chemist with a doctorate from Johns Hopkins, looking for a job at a time when more chemists were being laid off than hired.

"I saw an advertisement for a junior physicist," Katzoff says, occasionally haltingly, more often in a firm, conversational tone from his chair, alongside an oxygen pump. "I was very good in all of the physics courses I had taken, so it wasn't very far-fetched for me."

He took a test and the National Advisory Committee for Aeronautics' Langley Research Center hired Katzoff, who stayed for four decades, along the way repairing at least one deficiency in his resume.

"I didn't know a thing about flying," Katzoff says. "I didn't know what made a plane fly. But I knew how to study and I learned." 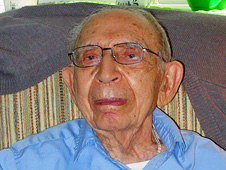 'Dr. Sam' at home. Credit: Laura Hodges
Well enough to develop codes for translating wind tunnel data into actual flying information for the development of many of the planes of World War II. And well enough to span flight from the propeller to the jet engine.

"Since I was largely theoretical, I wasn't out there getting my hands on things," Katzoff said. "I calculated what was wrong with them."

He spanned mathematics from NASA's female calculators to digital computers. And eventually he became the senior staff scientist under then-director Floyd Thompson.

"That meant I could do whatever I pleased," Katzoff said. "People thought the senior scientist had to keep an eye on everything in science, which wasn't true. I was doing my own work. If anybody wanted me to help, they knew where to find me."

He was found often when somebody was writing a technical paper.

You had to, particularly if you wrote.

"He was the kind of person who could look at a paper and tell whether it was a lot of bull," said George Brooks, former structures and materials head at Langley. "If you were writing a paper and were publishing, he would review it and that would help a lot of people in the field to come up with a better way of saying what they were trying to get across."

Says Bushnell: "He was the guy who instituted the clean way to write reports."

Sue Miller, technical information specialist at Langley's Technical Library, says she continues to get requests for the pamphlet.

In it, Katzoff advises, "The purpose of the report is to present information. You will hardly disagree with this statement; yet many authors seem to subordinate this purpose and quite forget the poor reader when preparing a report. . ."

"Apparently the presumed purpose to present information is frequently forgotten in the author's desire to show his own brilliance, to impress the boss, to impress the secretary, to demolish the rival or to get a raise. Worthy as these objectives may be, the basic objective should be to make the report clear and informative; furthermore, if this objective is attained, the secondary objectives will automatically be attained."

Says Katzoff, simply: "I had a reputation for being able to write English."

He has a wry wit and is ready to teach at any opportunity.

"I traveled with Sam on at least one occasion where we happened to spend a night at a hotel," Brooks says. "That evening, he was teaching me the basic elements of the Old Testament."

Another time, Brooks asked Katzoff about an old Dodge he owned.

When Katzoff retired from NASA, he moved back to his native Baltimore, where a school principal of his acquaintance talked him into teaching sixth-grade youngsters science for one hour a week.

From that classroom, he moved into working with older children in John Hopkins' Center for Talented Youth. Eventually, Katzoff funded scholarships to the center and wrote a book called "Twists and Turns and Tangles in Math and Physics."

"I didn't intend for it to be bought," he says. "I meant for it to be given away to bright kids all over the country. I meant it for bright high school kids on the verge of graduating. I was considering myself when I was graduating. I could have enjoyed that."

Instead, there is a generation shunning math and science.

He spends his days working on puzzles. "I do Sodoku," he says, smiling. "The ones in the newspaper are the easiest ones I do in a day."

Anyone who visits gets a tour of his "art gallery," conducted by Katzoff, who whips off his oxygen breather and scurries about on his walker, talking about a reproduction of a Picasso, a mosaic -- "from the walls of Babylon," he says -- and a print of flowers in a vase that was once on his wall at Langley.

Nearby are the NACA wings that virtually everyone who worked with the organization -- which was the forerunner of NASA -- has somewhere in their homes.

The stories come from his memories, of friends like Hewitt Phillips, who recently passed away, and of Dick Whitcomb.

But Sam Katzoff left a few memories of his own.

"Sam was good for Langley because he helped people," Brooks says simply.

It's an epitaph that was embellished at Johns Hopkins Center for Talented Youth, and it lingers at NASA, every time Sue Miller gets a call in the library for a copy of "Clarity in Technical Writing."