Grow Text SizeShrink Text Size
Bushnell on the Environment: 'We should have changed things 20 years ago.'
By: Denise Adams

Statements such as “humans have taken over and vastly shortened evolution” cause people to lend Dennis Bushnell an ear.

“We should have changed things 20 years ago,” Bushnell told a NASA Langley throng Wednesday at the Pearl Young Theater.

He says that if we continue our assault on the environment without change, we would face a six to twelve degree temperature rise in the year 2100, with an ocean rise of 78 meters.

Bushnell, chief scientist at NASA Langley, has broad expertise. The Department of Defense sometimes calls on him.

And concerned and fascinated groups, such as those from colleges, want more from him on the “Future on ‘Energetics.’”

“I have requests for this presentation backed up on my computer,” he explained. Bushnell will be at Georgia Tech next week and is planning to visit other venues this spring. 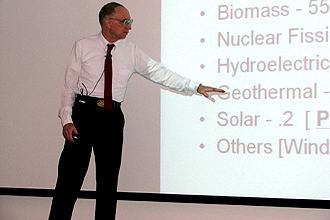 Image above: Dennis Bushnell not only states the problems, but he points out solutions. Credit: Denise Adams.

Wednesday’s presentation is going to be revised specifically for the “World Future Society.”

So why do people want to hear him?

Because, according to Bushnell, “there has been some conscious raising because of this presentation.”

Many state the problem. Bushnell has solutions.

The use of biofuel, energy storage and transmission, seawater agriculture, reduced aircraft emissions, space solar reflectors and conservation can help our planet to avoid catastrophic impacts to our economy and species extinction, Bushnell said.

Even though the outcomes are catastrophic and solutions have been presented, there are still people who don’t know what we face.

According to Bushnell, “People won’t pay attention until it’s been put on their radar screen.”

That can change through education and by having the government involved as “serious players.”

The bad news is, “the climate situation is far worse than we could imagine,” Bushnell said. “The carbon dioxide levels are greater now than at any time in the last 650,000 years.”

“We can do things to improve it,” he said.

“Working (against) this common enemy, which is a global problem, probably will bring together the human society of the entire planet in a wholly new way.”

Ninety-seven percent of all water is seawater. With 27 countries already using seawater agriculture, Bushnell explains, “this is not anything we need to invent.” Aquaculture was another solution presented by Bushnell.

Bushnell explained that if we use only 1 percent of the Earth’s algae, it could produce 20,000 gallons of fuel per acre each year. Algae can also help with disease resistance.

He said that the Great Salt Lakes would be a great place for algae pods, which could produce $1 trillion a year in fuel.

“As we go to biofuel, then we don’t have to worry about reducing carbon dioxide emissions,” he said. “We’ve already paid the carbon dioxide price upfront on the planet’s growth.”

He explained that five years ago, biofuels didn’t seem to make much sense to people, but a lot has changed since then due to research.

“Don’t look at commentary from five to 10 years ago,” he said. “We are, in fact, learning new things rapidly.”

And just how rapidly are warming estimates changing?

According to Bushnell, within the past five years, the predicted year of the sea ice-over of Canada has gone from the 2040 to 2013.

NASA Langley’s contribution to the research of these ideas, Bushnell says, will be determined after the presidential election, when funding streams are put in place.