What do jellyfish and submarines have in common?

Both swim underwater, certainly, but more to the point, according to John Dabiri and the U.S. Navy, jellyfish might lend attributes to the submarine propulsion of the future. 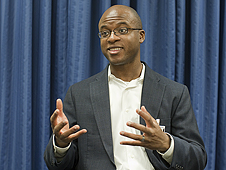 A trip to the Long Beach Aquarium changed the career path for John Dabiri, who left helicopters behind for jellyfish. Credit: NASA/Sean Smith

Click image to enlarge
It's something Dabiri, 29, couldn't have cared less about 10 years ago. That's when he was a rising junior at Princeton and was offered a summer internship in Dearborn, Mich., with Ford. Instead, he opted for a summer at Cal Tech, and for all of the reasons you might expect.

His career was going to involve something in the air.

"I thought I was on a career path toward studying micro air vehicles, helicopters in particular, and then I did a summer internship at Cal Tech, where my advisor suggested that we go to the aquarium and study some of the animals there," he said. "I picked up jellyfish, and I've never put them down."

That advisor, Mori Gharib, had latched onto jellyfish as having potential to model the beating heart and, therefore, become a possible tool for diagnosing heart disease.

That's what he kept sending Dabiri in emails back at Princeton, Dabiri began to wonder if Detroit might be a better alternative. After all, the last time he had studied biology was during his sophomore year at a high school in Toledo, Ohio.

But all it took was one trip to the Long Beach Aquarium to change that.

"I think it was that I was still able to use fluid mechanics, but on a system that's unusual," Dabiri said. "The opportunity to study biological systems from a perspective that sees them as machines was really attractive to me.

"Now that I've been studying them for several years, I can see several parallels from the way these animals swim and, for instance, the way a submarine moves through the water. My research is focused on bringing these 'animals' together."

The idea is to take a relationship between the two beyond mimicry. The earliest failures of man to fly on feathered wings pointed to the gulf between him and the animal.

"We're trying to move beyond copying what nature does," Dabiri said. "What is going to move the field forward today is understanding the animals -- for instance jellyfish and how they swim -- and then rather than copying the jellyfish as a whole, we take design principles from the jellyfish and merge them with submarine design."

The shape of the submarine is more efficient than that of the jellyfish. The jellyfish swims with lower energy use by manipulating its wake.

At least one submarine design uses an internal propeller to push water through a submarine, much as a jet engine pushes air to propel an airplane. At issue is whether a continuous push is more effective or one in which water is pulsed through the system, much as the pulses produced when a jellyfish moves through the water.

Dabiri is working on the Navy-funded project – and others -- with graduate students in his lab at Cal Tech and at Woods Hole, Mass., with a colleague from Providence College.

Heart trouble diagnosis from jellyfish. Power from jellyfish. Ocean currents from all kinds of fish. Perhaps motion of a school of swimming fish lending itself to the design of vertical wind turbines that don't require the land mass of a conventional wind farm.

"If anything, I think it's a testament to the power of engineering," Dabiri said. "The fact that we can take what we've learned from studying boats and bridges and airplanes, and when we combine that with biology, the opportunities I think are endless in terms of the applications that we can address."

It's been a fast and furious 10 years for Dabiri, with many years of study to come. Helicopters are history.

"It's amazing how one visit can turn the path you're on," he said. "It's all from one trip to the aquarium."