Grow Text SizeShrink Text Size
The Return of the Creativity and Innovation Program
By: Jim Hodges

After a two-year hiatus during which only ongoing studies could be supported, the Creativity and Innovation program, the "pointy end of the research stick," according to Donna Speller Turner, is requesting new proposals.

Creativity and Innovation grants give researchers a chance to duplicate what Karen Taminger has done. She started with one of the C&I grants awarded in 2001, then added another grant in 2002.

"C&I provided us the opportunity to get started and actually show that this idea was possible," she said of the Electron Beam Freeform Fabrication.

The EBF3 is a process that uses an electron beam, wire feed and computer controls in manufacturing near net-shaped metallic structures. The process reduces waste and energy spent on production and generates what Taminger – who works in Advanced Materials and Processing Branch -- calls a "2 to 1 buy-to-fly ratio," rather than the more standard 12-to-1 or as much as a 20-to-1 ratio. 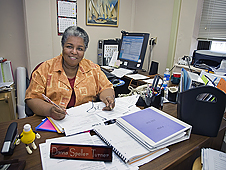 Click on the image for a larger view
The EBF3 was developed at Langley.

"(C&I funding) allowed us to successfully pitch this to other organizations to cobble together a good funding stream to maintain and grow our in-house efforts from 0.5 FTE (full-time equivalency position) in 2001 to 10 researchers adding up to about five FTE today," Taminger said.

The goal of the program is for the innovation eventually to spawn a partnership between NASA and industry.

The ideas are often so revolutionary that as many as 22 patents have come from C&I grant programs in a single year, nine from a single idea.

The rules this year require that the idea address at least one of the nine Langley strategic technical goals, sometimes called "revolutionary challenges." They involve everything from climate to exploration to aeronautics.

Only one Tier III, or renewing proposal, will be granted this year.

Information about the grants can be obtained through the C&I Web site, or through a briefing to be held on May 9 from 9-10 a.m. in Room 205 of the Langley Navigation Center, building 1212.

Turner gets excited when she talks about C&I grants.

"It's not unusual to find someone who has been scratching at an idea for 15 years," she said. "This can be a time to prove your idea, to share your idea. To get to the pointy end of the research stick."

For the first time in three years.