When Jeffrey Sachs speaks of poverty, he's not talking about a hungry waif in New York or a homeless person in Chicago.

"Extreme poverty is so desperate that, for many people, for millions of people, every day is a struggle for survival," Sachs said Tuesday at NASA's Langley Research Center.

And then, Sachs, who delivered the third of four colloquium lectures celebrating NASA's 50th birthday before a large crowd at the Reid Conference Center, connected the dots from a village in West Kenya to the agency.

Sachs is director of The Earth Institute at Columbia University in New York and an advisor to United Nations Secretary General Ban Ki-moon. Sachs' field is economics, and his passion is working to reduce extreme poverty, disease and hunger.

NASA's first world-saving effort came when Nimbus-7 showed a hole in the ozone layer over Antarctica, he said. Further experiments showed that the ozone was being depleted by the release of chlorofluorocarbons in such things as refrigerants and aerosol sprays, and that knowledge spawned a series of environment-saving treaties. 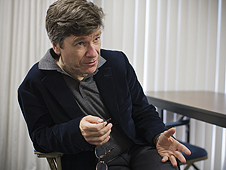 "Without NASA satellites, this drama would not have been properly understood and confirmed," Sachs said. "And my guess is that without your pictures, this would never have led to a public understanding so rapidly and dramatically. … I think a picture was worth a billion lives, in this case."

This time, Sachs is asking for NASA's help in chronicling the causes of global warming. He sees the effects vividly in his work on poverty, which can be exacerbated by global climate pressure. And he sees a time at which the forces to remedy the poverty – something, Sachs said, that can be done in 20 years – are colliding with the forces feeding it.

Economies are cyclical, and the economic downturn the nation and the world are going through will end. But "the problems for the planet is different," Sachs said. "It's not like a cyclical recession followed by a recovery. We are on a long-term path for massive Earth reorganization in a way that we will not like."

Sachs seeks help from developed countries in providing, not food but the resources for growing the food necessary for people in less-developed lands to feed themselves and to trade for other essentials. Seed and fertilizer are his quests, along with medical care and even the most basic of needs: a $5 bed net that can keep malarial mosquitoes away from sleeping children for five years.

But without water to drink and grow crops, seed and fertilizer are worthless. And with an assault on the environment by both man and nature, rainfall can be limited, and water sources can be contaminated.

"They read like an Agatha Christy novel," Sachs said of climate-affecting issues. "We have so many complex forces right now that we really don't know what we're doing.

"My guess is that we're going to be counting on you to be snapping pictures of (those forces and effects), and integrating the missions and the modeling to be able to identify the next debacles and thresholds and risks that we're facing."

The cost, he added, seems minuscule when compared to the effect.

"We have a $15 trillion economy," Sachs said. "One cent out of $100 for Earth observation. I think that's a pretty good buy, frankly.

To do this, though, requires education.

"We have to be able to convey and explain to the public why this is so crucial," Sachs said. "It's not going to break the bank. We've got to save the world, not worry about breaking the bank, and fortunately it's much cheaper than it looks."

He acknowledged the fiscal pressures on NASA and its diverse mission, which includes space exploration.

The challenge is to NASA, and to the people that fund the agency, because, Sachs said. "you really are the core of the country's -- and therefore the world's -- system for understanding these very life-saving, survival needs."