Grow Text SizeShrink Text Size
Colloquium: 'It's Amazing, in Hindsight, How Much Foresight They Had'
By: Jim Hodges

Besides being the preeminent rocket scientist in the world at the time, Wehrner von Braun was a prophet, and when he came to NASA Langley to deliver the first of what have been 40 years of Colloquium speeches, he offered: 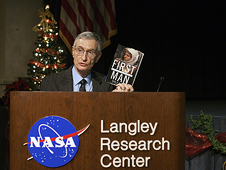 As part of his narration of the celebration of the 40th anniversary of NASA Langley's Colloquium Series, Keith Henry holds Jim Hansen's "First Man" biography of Neil Armstrong. Hansen was a Colloquium speaker on Dec. 1, 2005. Credit: NASA/Sean Smith

Keith Henry, retired NASA Langley News Chief:
So, it's like, "OK. How are we going to make this interesting?" And then I got to looking and talking with Michael and the subcommittee about how we're going to do this and looking at all the people. And suddenly the problem got to be the opposite. How are we possibly going to pick just a few of all these speakers because they're so many? And we started out looking at two per decade which would have given us eight. And there were just so many good ones we added another three and ended up with 11 all together. But most of these are single topics, single speakers. I don't think anyone went through to see home many different speakers there are, but it's probably 400 and some. There are all kinds of people.

Michael Holloway, Colloquium Committee Member:
There were tons, others we could have done, but it's just an hour...


"The question as to what kind of budget NASA will have in future years is anybody's guess. If I find anything a little frustrating in my present role in Washington, it is that there is more room for yielding and wielding blue pencils than for the play of imagination."

Speakers came to Langley to deliver their own ideas to audiences they considered special because many among those audiences were experts in their own right. They gathered as they did Tuesday in the Reid Conference Center, this time to remember some of those speakers and to celebrate four decades of ideas in a Colloquium entitled, "At 40, NASA Colloquium Continues to Stimulate, Teach."

The celebration, which was the 498th Colloquium speech, was put together by Michael Holloway, Susan Palmer and Sheila Thibeault, with technical help from Hal Weaver and Lee Pollard. It was narrated by Keith Henry, who worked at NASA Langley for 31 years and whose memory of colloquia dates back to May 2, 1977, at the Hampton Coliseum, where he and wife Mary heard Isaac Asimov say this about colonies on the moon as a way to deal with an overpopulated Earth:

"The logical thing to do would be to build suburbs up there – human settlements … and have people live there: by the tens of thousands, by the millions, by the tens of millions and have an entire space community doing the work, for themselves, as well as for us." 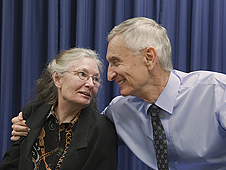 Sheila Thibeault (left, with celebration narrator Keith Henry) had the idea for a series called "Our Little Corner of the World" that was accepted as NASA Langley's Colloquium Series 40 years ago. Credit: NASA/Sean Smith


The monthly colloquium was an idea that sprang from a Langley director's retreat in Northern Virginia in Ap00ril, 1971.

"The director invited six young folks under the age of 30 to come for one day, to each give a presentation on something they thought might be a good thing for the center," said Thibeault, then as now a member of the Colloquium Committee. "I gave a presentation I called 'Our Little Corner of the World' and suggested the Colloquium."

Management liked the idea, started the Colloquium Committee and Thibeault became its first chair. From its first meeting, held in the picnic area alongside the Reid Conference Center, came the notion to bring von Braun to Langley.

"By the time he visited Langley, in October of 1971, his job was to help plan and lay the groundwork for the next decade of NASA program," Henry said in his Tuesday narration. "It was a time of great triumphs for NASA – but it was also a time of change and challenges."

Said von Braun on that day: "We don't have a problem getting good ideas. The problem really is to sort out which ones are the most promising ones and then chop those down to 50 percent because that's all we can afford."

Von Braun also acknowledged where he was speaking, lauding Langley engineer John Houbolt for pushing against the tide to sell NASA on using a Lunar Orbiter Rendezvous to land an astronaut on the moon in the Apollo program.

Just under 23 years later, Houbolt came back to Langley as a Colloquium speaker and talked of that time and the pressure it brought him.

Houbolt told the Colloquium assembly on that 1995 day of learning that his idea of a Lunar Orbiter Rendezvous had been accepted, and of a man coming to him and saying, "I can safely say, I'm shaking the hand of the man who single-handedly saved the government $25 billion."

Between von Braun and Houbolt, and beyond to today, the Langley Colloquium Committee broadened its reach, extending topics beyond aeronautics and aerospace to such things as economics, with Nobel Laureate Milton Friedman coming to Langley on May 1, 1978, when inflation was more than 9 percent, mortgage rates were higher than 10 percent and the prime rate went past 11.5 percent.

Two years later, Jacques Yves Cousteau related space and the sea for the Langley audience, and a year after that, Pulitzer Prize-winning author Alex Haley talked about the family and his novel "Roots."

He also had the Reid Center audience laughing when he talked about how he became a writer. While working as a mess attendant in the Coast Guard during World War II, Haley began writing love letters for shipmates. Upon returning from a brief leave in Brisbane, Australia, those shipmates related tales of the effectiveness of the love letters.

"I can tell you the truth, I didn't have to cook anymore, and for the rest of World War II, I never fought a soul," Haley said in that October, 1980, talk. "All I did was write love letters. And that was what gave me some sense that this writing was useful."

Those excerpts and more hit home with the audience, who came to learn about NASA Langley's history and to remember parts of it that included them.

"I went to von Braun's lecture," said Norm Crabill, a retired NASA Langley engineer who continues to do research as a contractor. "I've been to a lot of them over the years.

"It's amazing, in hindsight, how much foresight they had."