Imagine a future where the number of days over 90 degrees soars from about 35 per year to nearly 50. And the amount of rain we get rises as much as 15 percent. 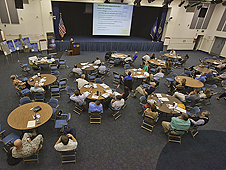 The "Adapting Now to a Changing Climate" workshop was aimed at people besides the general public who will have to deal with climate change consequences – Langley planners, safety and security personnel, utility companies … the list is long.

Similar workshops are planned at every NASA center as part of an agency-wide climate risk management initiative, said the Science Directorate's Russell De Young, a senior scientist who helped organized the workshop.

"NASA Langley is a very valuable national asset and needs to be protected from the consequences of climate change to allow it to perform its valuable research mission well into the future," he said.

Increasing sea level was a major topic of discussion here because of the area's proximity to the ocean.

"There is considerable sea-level rise already happening across the region," said Benjamin McFarlane, a regional planner with the Hampton Roads Planning District Commission.

Regionally, the sea level is rising about four millimeters - 0.15 inches - per year, giving Hampton Roads the highest rate of sea-level rise on the East Coast. 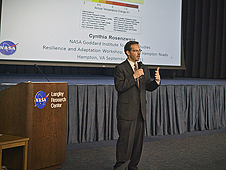 "Aside from New Orleans, Hampton Roads is the largest population area at risk from rising sea level," said Skip Stiles, executive director of Wetlands Watch, based in Virginia Beach.

Eventually, ocean waters will overrun homes, businesses, and utilities – whatever is in its path.

McFarlane said numerous government and private organizations throughout the area are doing research, analysis and planning on how to adapt to climate change.

"But there isn't too much in the way of actual adaptation going on," he said. Adaption poses numerous and complex legal, economic, political and science challenges.

"Actually having to do something is the next bump," said Stiles. "Everybody's struggling with the same issues."

Overall, the region will experience increasing heat, and an upswing in intense precipitation events, river flooding, drought, and high winds, according to workshop literature based on climate model simulations, published literature and "expert judgment."

"Each of those," said McFarlane, "are going to have major impacts on the way we live, and whether we are going to survive" as a region.