A panel of leading research scientists and policy makers convened at the College of William and Mary on Nov. 29, 2007, to discuss the latest findings on approaches to deal with the impact of global climate change on Virginians.

The Intergovernmental Panel on Climate Change (IPCC) released the synthesis of its Fourth Assessment Report on November 17, noting three key items for the first time: 1) human activity is responsible for global warming; 2) global warming is here now and we have to adjust to that reality; and 3) many technologies already exist to avert the worst consequences of global warming. 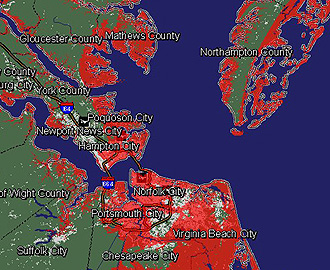 Image Right: This map, used in Bruce Wielicki's presentation, shows the areas that would be under water should a sea-level rise of four meters occur. Image credit: Weiss and Overpeck, The University of Arizona.

"Forecast Virginia: A Briefing on the Impact of Climate Change" was held to share information on the observed and projected impacts of global warming. The National Environmental Trust (NET) and the Pew Charitable Trust cosponsored the event. The NET was established to inform the public how environmental problems affect our health and quality of life. The Pew Charitable Trust uses science and policy analyses along with advocacy campaigns as tools to address climate change.

In recent congressional testimony Gov. Tim Kaine called Hampton Roads "the second most vulnerable region in the nation" to the effects of sea-level rise from global warming. A sea level rise of two to three feet would impact the resources of the Chesapeake Bay and the economic significance of regional ports. It would have military and security implications, impact the historical significance of America's first English settlements and place a population at risk from tidal events.

The need for information on the challenges and strategies is clear.

Dr. Robert Correll, program director at the H. John Heinz Center for Science, Economics and the Environment, began the discussions by framing global warming in an historical context, looking at changes over the last 400,000 years from deep cores into the Greenland and Antarctic ice sheets.

He then pointed to the mid-1900s being an important time of recognition, but characterized the last two decades as a "tipping point" in physical climate change, as well as the public awareness of the challenge. Correll warned of acceleration in the rate of change: "Compared with past changes—physical, bioecological or human—the current change is abrupt."

"Humans are now geoengineering the planet. We just don't know very well how to do it," said Dr. Bruce Wielicki, Senior Scientist for Earth Science with the Science Directorate at NASA Langley Research Center. Wielicki said one of the biggest challenges we face is that there is "no national climate change plan."

Wielicki's presentation began with a broader, national perspective, then focused on regional implications. One shocking image clearly illustrated the impact on Hampton Roads of a sea-level rise of four meters. Hampton, Poquoson, Virginia Beach, Norfolk and Portsmouth—all under water.

Wielicki said that sea level was 12 to 18 feet higher at the peak of the last interglacial warm period 125,000 years ago. At that time, the polar regions were as warm as human greenhouse gas emissions will make them this century. What is unclear is how long it will take the glaciers to respond. What is more sure is that just the expansion of warming ocean water will cause at least a 1-2 foot sea level rise by the end of this century.

Roger Mann, Virginia Institute of Marine Science's Professor of Marine Science and Director of Research and Advisory Services, stressed that given the current state of warming, Virginia should become a "national laboratory" or focus of study. "Virginia has an incredible diversity of native ecosystems, yet without boundaries. Each is intimately involved with the next, and everyone of them is subject to climate change impact," he said.

Mann's discussion went on to stress for Virginians what Wielicki indicated earlier in the briefing as one of our nation's biggest challenges.

"We have no coherent plan to assess impacts at natural resource or societal levels," Mann said. "A large picture of the integrated ecosystems that are the Chesapeake Bay watershed is lacking in Virginia—and it is needed."

The Chesapeake Bay watershed extends from the Shenandoah to the shelf break off shore.

The final speaker, Stephen Walz, is Kaine’s Senior Advisor for Energy Policy. His office is tasked with setting recommendations for state actions.

The ports of Hampton Roads have the biggest growth potential of any in the nation. "Along the outer continental shelf, oil and gas exploration are in the works," Walz says. "These economic endeavors will be staged along the mid-Atlantic."

Also, the ports are home to the largest cranes in the world. The growth potential makes us what Walz describes as the "largest economic choke point" for shipping. Hampton Roads is No. 2 in the country for the tonnage of cargo that passes through its ports.