The appearance of Bruce Wielicki, Steve Sandford, Mike Gazarik and Dave Young before reporters Tuesday had its genesis in white papers that Wielicki, Marty Mlynczak and some of their peers authored for the National Research Council years ago.

Sandford's speech to an overflow September Colloquium crowd at the Reid Conference Center had its same origin.

NASA Langley scientists Wielicki and Mlynczak and Harvard scientist Jim Anderson argued that a consistent measurement of the radiation from Earth to space was needed. That calibration and verification were needed for existing measuring systems. And that a benchmark record to measure present and future climate developments against was essential. 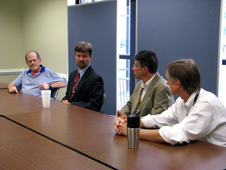 Click image to enlarge
It's the definition of the Climate Absolute Radiance and Refractivity Observatory (CLARREO) mission, and first the group, then Sandford -- the mission formulation manager -- alone stood Tuesday to explain NASA Langley's role in developing it.

Essentially, it's the lead role in what is likely to be a nearly $1 billion effort.

"Langley is on the verge of a new era in scientific contributions," Sandford told the Colloquium assembly of the mission, probably Langley's biggest since Mars Viking in 1976. "The challenge is great, but over the years, Langley has demonstrated that it can meet a difficult challenge."

CLARREO is one of four "Tier One" missions of the National Research Academy's Decadal Survey, which published 17 missions in all. CLARREO's value will come in providing a more accurate measurement of climate factors and effects than has ever been present in one place. From those measurements will come improved climate models, which means improved forecasting.

"The key issue is that this data is going to be used to set national and maybe international policy," said Sandford, who pointed to a discrepancy involving the forecasted melt of the polar ice cap and the actual, much-greater melt as an example of the use of better data.

The CLARREO group is about 50 strong at Langley, with about 20 others from beyond the center. That group is likely to grow to 150, Sandford said.

The group is in what Sandford called "pre-Phase A," which means that -- for now -- there are more questions than answers.

For example, should industry build the CLARREO instruments or should they be built in a government laboratory? And how will CLARREO's instrument suites be put into orbit? And what should CLARREO measure anyway, and how should those measurements be taken?

Scientists from throughout the community have opinions and aren't reluctant to offer them.

"There is a natural balance of science and engineering in all of this," said Dave Young, the project scientist.

Gazarik, CLARREO's chief engineer, answers the questions with questions of his own.

"Part of the answer, at least on the engineering side, has been why?" he said. "Why do you need that and what will it cost in terms of engineering, resources, mass and volume?"

On the science side, added Wielicki, the mission scientist, "In debates we refer to science 'desirements' and science requirements. ... There are a lot more 'desirements' than requirements, and the winnowing process is very stressful. That's what we're going through now."

The process of a harder definition of CLARREO is nearing an end.

Industry is being queried for ideas on instrument building. An Atlas V or Delta IV launch vehicle could be used, if it can be made to put two CLARREO observation satellites into different orbits on the same trip aloft.

The answer to every question includes cost, because CLARREO will have to take its place with everything else in the NASA budget line. The importance of a clear definition and clear goals for CLARREO is an issue in cost.

And they're working on a deadline. An anticipated launch date of 2016 has several benchmarks along the way.

First comes a mission concept review near the end of this year. It's a time for answers to many things that remain questions at this point.

"That's when we go before a board and describe what our concept is for the mission, and what the science output will be and how we go about getting the science data," Sandford said. "That's a key decision point."

From there, NASA headquarters determines if the mission goes to Phase A not later than June, 2010. About six months after that there is an acquisition strategy decision concerning instruments and other aspects of CLARREO.

For now, there is plenty of work to do.

"I'm not getting a lot of sleep," Sandford said with a smile.

The pressure of a project that can take its place alongside Langley scientific satellite missions such as SAGE II and III, HALOE, CERE, SABER and ERBE will do that to you. It's an alphabet soup of success, a legacy that goes a long way toward luring missions like CLARREO to the center.