When Clint Cragg read about the August 5 cave-in that trapped 33 men in a gold and copper mine, 2,300 feet below ground in Copiapo, Chile, it was just another headline.

There are cave-ins every day, and Chile is a long way from Langley, where Cragg works with the NASA Engineering and Safety Center.

Two weeks later, he was asked to join two NASA doctors and a psychologist to visit Copiapo, and the cave-in came closer to home. By then, it was understood that the miners could not be rescued until sometime late in November or early in December.

Cragg wasn't sure what he was getting into, and he approached the problem as he would any NESC assignment. As a principal engineer, he is used to working with a team of diverse experts. 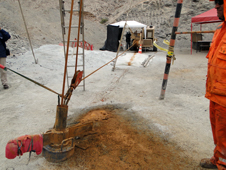 In the foreground is a 4-inch in diameter pipe, one of two that are providing lifelines to the trapped miners in Chile. Credit: NASA/Clint Cragg.
"I got a call from my boss at headquarters that these guys might need some help, so I got some engineers together and started 'what-iffing?' for scenarios in which we might help," Cragg said of the NESC. "Putting teams together and getting the best talent from across the agency, that's what we're pretty good at.

"While we were doing that, the request from the Chileans became more clear."

They wanted the expertise of people who were used to dealing with humans – such as astronauts – who are confined in spaces for long periods of time.

"What they were really interested in were the medical and psychological aspects of what we do," said Cragg, who added that his primary job on the mission was to support NASA doctors Michael Duncan and J.D. Polk and psychologist Al Holland, who recommended that the miners exercise and find a way to keep track of daylight and dark in their sleep patterns.

"They asked me to go down and help the doctors in case the doctors needed some technological device that NASA could provide, and then I could work with people back here in the states and try to help," Cragg said.

What the Chileans also got was a man used to working with other men in tight spaces for long periods of time. Before coming to NASA in 2003, Cragg commanded the Navy submarine Ohio.

"They had brought in the commanding officer of a Chilean submarine to discuss long-term underwater operations," Cragg said. "One of my basic recommendations was that they stay busy, because that's how we survive in the U.S. submarine force. You're really busy underway, and you don't have a chance to think about anything but your work, which is a good thing.

"The miners were already doing that. They were set up by their shift foreman." 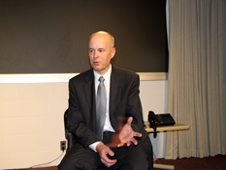 Clint Cragg is working with NESC engineers on criteria for rescue devices to bring trapped miners to the surface after a rescue shaft is finished. Credit: NASA/Jim Hodges.
That left Cragg to talk Navy with the Chilean sub skipper and to see how the rescue efforts were evolving. Like the other members of the NASA contingent, he looked ahead.

"They are just beginning to confront some of the issues they will face if they are there for a long time," said Holland, the psychologist from Johnson Space Center, in a teleconference Tuesday.

"They need to be doing meaningful work. And it's important that they share the responsibility for helping extract themselves."

That extraction is apparently going to require a device that will fit through a 26-inch diameter shaft and will hold a miner for the return trip to the surface. Perhaps a video and/or audio hookup with the miner during extraction?

"They're in the process of designing some kind of rescue enclosure," Cragg said. "They'll lower these cages down into the mine and pull them out. They have four or five different companies involved in designing these cages.

"I offered while I was down there to help define suggestions on design criteria that they could use to evaluate (these ideas). We're working to kind of put these suggestions together."

If he is asked, the criteria will be ready.

"I don't know how much involvement there will be," Cragg said. "We're trying to work on some broad brush things this week, but it will all depend on whether the Chileans want our help."

While in Chile, Cragg saw the four-inch in diameter palomas, tubes from the surface that are being used to supply the miners 2,300 feet below. Capsules, each about two meters long, are sent through the palemas with clothes, food, water, cameras and anything else the Chileans can think of to keep the miners involved while three separate shafts are being drilled as part of the rescue effort.

He came away impressed, both by the Chileans and their rescue efforts.

"I'm not a miner," Cragg said, "but from what I understand, the Chileans are writing the book. If this isn't the deepest rescue I've ever heard about, it's certainly the longest."