Grow Text SizeShrink Text Size
Children Go to Work to Learn About NASA, Have Some Fun
By: Tommi Barrett-Greenly

Fun and learning were had by all Friday at NASA Langley Research Center's "Take Our Children to Work Day" event held at the Reid Center. 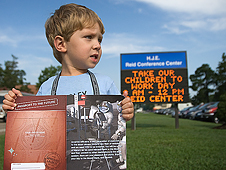 Devin Smith has his passport for the future outside the Reid Conference Center after participating in "Take Our Children to Work Day." Credit: NASA/Sean Smith

Outside, a shiny red fire truck, baseball pitches clocked by radar and the Langley playground drew crowds of smiling kids and families. Inside, employees and children milled around tables that offered NASA-themed activities, games and demonstrations. A bus also stopped by periodically to take eagerly waiting visitors on a center tour.

Janet Sellars began the event by showing the film, "One Small Step," which quieted the crowd as they stopped to watch Neil Armstrong step down on the moon and say, "That's one small step for man, one giant leap for mankind."

Jill Prince read aloud a children's book about the first moon landing, told from a child's perspective. With the movie and book setting off the day, children and adults alike were ready to learn more about what NASA does.

There was something for every person and every age. Participants could practice repairing the Hubble space telescope with spacesuit gloves, fly and land a plane on a computer flight simulator, or test their concentration performance with a golf game designed to provide biofeedback training.

They could make green slime, create bracelets and key chains with ultraviolet color beads, and paint their nails with a polish that changes color in the ultraviolet rays of the sun.


Throughout the center, presenters gave talks to kids and adults about a variety of topics. A Virginia Air and Space Center speaker awed numbers of children when he shot circles of smoke up to the ceiling with his "Airzooka."

Engineers explained the Max Launch Abort System and showed videos demonstrating the project. NASA Langley's Environmental Management Office shared how it supports NASA, the community and the planet, and encouraged visitors to also take part in caring for the Earth.

Members of the local police department were present, too, providing a fingerprinting service for children and their families.

Parents were impressed with the hands-on activities available for the kids and the knowledge they gained.

" 'Take Our Children to Work Day' is very worthwhile for the kids," said Ken Wright, who brought his daughter, Keanna, and four other children. "They talk about it for a long time afterwards. It lasts beyond one day." Children were just as impressed as the adults were.

"It’s great!" six-year-old Laura Weaver exclaimed. "I liked everything. And I really liked making the goo!"

By the end of the event, children and their friends and families had learned about NASA and its role in the world, leaving the Reid Center with bags full of NASA tattoos, souvenirs, green slime and plenty of educational materials.

But more importantly, they left with a meaningful memory to hold onto.

"Take Our Children to Work Day" was a special day for children and their families, as they celebrated time together at NASA Langley Research Center.